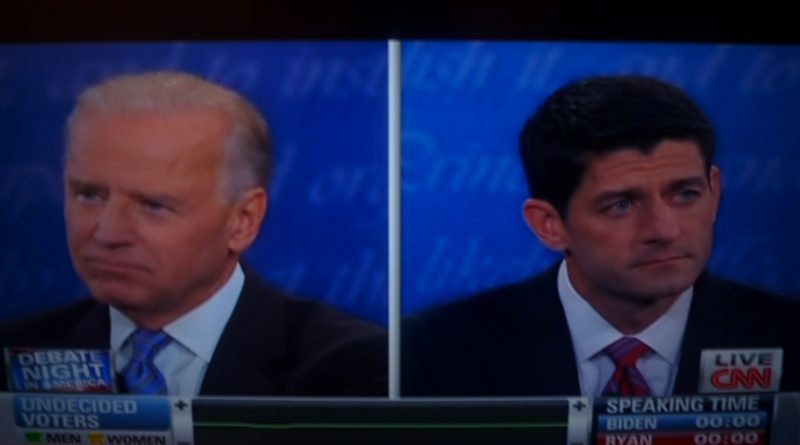 The vice-presidential election debate saw Republican Paul Ryan win in the soundbite stakes, including at least one carefully-enunciated zinger that may or not have been scripted in advance; but Romney’s running mate left us none the wiser on specifics on key issues – while anyone who says that Joe Biden’s performance was gaffe-free would say so only if they were not annoyed by that sneeringly grinning responses to his rival.

A key issue was whether Ryan could follow up the momentum established by his principal, Mitt Romney. Polished and presentable as “the congressman” (as Biden routinely referred to Ryan, apart from as “my friend”, the latter eerily reminiscent of McCain’s folksy usage in 2008) was, Ryan left a number of questions unanswered, in effect.

Ryan offered no clear alternative on deposing Syria’s Assad. Domestically, he lacked specifics on the tax reform he said was so desperately needed. He had the same problem as Romney when promising bipartisanship, a promise too easily open to challenge by the Democratic camp frustrated by the obstructionism so long displayed by the Republicans in congress.

But Ryan got his messages home – that the Obama administration has represented four years of failure, of unfulfilled promise on the deficit, on job creation, on resetting relations with Russia; that the Obama administration would dangerously reduce US military capacity, encouraging America’s enemies; in all, in these and other messages, Ryan actually was a better communicator than Romney.

Biden, apart from the mistake of grinning and shaking his head in an all-too-condescending way, acquitted himself well on the factual level – or at least, in challenging the assertions of his opponent.

On the situation in Libya immediately after the murder of the US ambassador there, Ryan succeeded in making the administration look incoherent, cack-handed and as having reacted tardily and inadequately in a situation where any US official would be the subject of serious security threats.

But on Iran and its nuclear programme, Ryan lost to Biden on substance – or “the facts” as Biden kept on insisting. Ryan had no adequate response to Biden’s challenge “are you going to go to war?”. Biden was ready when the long-telegraphed play on relations with Israel came, hammering out just how often Obama and Israeli prime minister Benjamin Netanhayu (“Bibi”, in Biden’s usage of the Israeli leader’s familiar monicker) had spoken. Biden won the point on the imminence or otherwise of the Iran nuclear threat – Ryan seemed to shift from implying that it was very imminent, to perhaps, well, not that imminent.

But on the economy, Biden could offer nothing better than an apologia, and a by-now unpersuasive reminder of the parlous state of affairs that the current White House inherited.

Ryan did well in his delivery in response to the much-invoked Romney gaffe on Detroit, turning to Biden: “I think the vice president knows sometimes the words don’t come out of your mouth the right way”.

But much better than that was Ryan’s delicious sally to Biden: “I know you are under a lot of duress to make up for lost ground but I think it would be better if we don’t keep interrupting each other”.

Some moments were all too obvious and predictable. Unlike his principal who in the first debate took stick for distractedly taking notes and apparently forgetting his wider audience, Biden went to-camera at least three times (in a way, reminding that this was meant to be a debate; the format made it seemed – if the stakes are momentarily forgotten – like just another TV talk show with an interview and two studio guests of opposing views).

Biden also had his moment when the Obama administration came under fire from Ryan on supposed pork-barrel spending in the stimulus programme. Why, he had had two letters from congressman Ryan asking for some of the money for Wisconsin, who had written – so Biden said – that the money would create jobs.

Biden was all too clumsy in coming out with a rejoinder to Ryan at one point, arching at his opponent: “oh, now you’re Jack Kennedy?” We all remember “you’re no Jack Kennedy” being delivered, fatally, to Dan Quayle. But such things really do not stand recycling (as Biden said of Republican policy on Medicare and social security).

It’s probably me, but it was discomfiting to hear Ryan be so contemptuous in portraying the US as currently conducting its foreign policy through the UN. Inadvertently – not that this election would be won or lost on this point – he was confirming that Obama had fulfilled his promise on multilateralism. But Biden let it go, a pity given that it would have been some defence against Ryan’s repeated charge of Obama’s foreign policy “unravelling”.

To get to judgment, did this debate result in the Obama campaign unravelling further – or, if you prefer, did Biden achieve the regaining of lost ground? To the latter construction of that question, no*. Ryan did far too well, for all the lack of specifics and the rebuttable claims, for the vice president to bring home a change of fortunes. Turning around the polls again in favour of the Democratic ticket remains in the hands of Barack Obama, in the two debates remaining.

* A CNN-ORC poll reaches the same conclusion, handing victory to Ryan, 48 to Biden’s 44.