Romania’s constitutional court invalidated on August 21 the presidential impeachment referendum held on July 29, saying that the plebiscite was void because it failed to meet the turnout criteria, which required at least 50 per cent of the voters to cast ballots.

A total of 8.46 million people voted in the referendum, out of 18.29 million registered voters. The vote was overwhelmingly (87.5 per cent) in favour of impeaching unpopular president Traian Basescu, who had asked his supporters to boycott the plebiscite.

The court said in a statement that the referendum had been organised properly, but could not be validated because it failed to meet the turnout quorum.

Romania’s two chambers of parliament will next have to meet for a joint session, interrupting the summer recess, to take note of the court’s decision.

Theoretically, this should spell the end of the institutional crisis gripping Romania for the past two months, but the outcome could be less straightforward than Basescu resuming the presidential office.

The ruling coalition between the centre-left Social-Democrats and centre-right National-Liberals, has been deliberately vague concerning its next steps, saying earlier that it “would deliberate on the appropriate course of action” once the court pronounces its decision.

The National-Liberals, who according to the coalition agreement would nominate the coalition’s presidential candidate at the next elections (scheduled for 2014), have already hinted that they wanted to suspend Basescu again and hold a second referendum, this time with a lower turnout requirement. The party’s leader, Crin Antonescu, has served as interim president while Basescu was suspended, but will have to relinquish the office soon.

Prime minister Victor Ponta, the Social Democrat leader, said that the court’s decision would be respected, but said he had no intention to collaborate with Basescu, whom he described as an “illegitimate president”.

Ponta said that he would put forward a sweeping proposal of constitutional reforms that would clarify the extent of the powers given to different state institutions – one of the main criticisms levelled at Basescu since he took office in 2005 has been that he constantly interfered with the workings of the cabinet (he was suspended and faced an impeachment referendum on the same grounds in 2007, but was reinstated in what was seen as a protest vote against the government of the time and an endorsement of Basescu’s anti-corruption rhetoric).

The local currency, the leu, briefly rose versus the euro upon the announcement, but then fell back to about 4.50 lei a euro, showing that the markets were not persuaded that the political crisis was over. The currency has been in freefall since the ruling parliamentary majority voted to suspend Basescu in early July.

35.7% of the Greek population is living in poverty 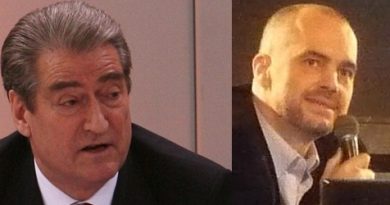