Russian foreign minister Sergey Lavrov said it would be “quite unusual” to hold elections while the Ukrainian army is being “used against part of the population.”

Lavrov’s comment comes a day after a battle between Ukrainian security forces and pro-Russian separatists in the eastern Ukrainian city of Slovyansk.

Russia’s Interfax news agency quoted an unnamed spokesman for the pro-Russian forces in Slovyansk as saying 20 of its fighters were killed Monday and dozens of civilians were wounded.

On Tuesday, British Foreign Minister William Hague, who was also in Vienna for the Council of Europe meeting, accused Russia of trying to prevent or disrupt Ukraine’s May 25 presidential election.

And French President Francois Hollande warned Tuesday that there will be “chaos and the risk of civil war” if the May 25 vote is not held.

Separately on Tuesday, authorities suspended flights in and out of eastern Ukraine’s industrial hub of Donetsk. It is unclear why the flights were suspended or how long the suspensions were to remain in effect.

With violence on the rise in Ukraine, United Nations Secretary-General Ban Ki-moon has told the French News Agency he will offer himself as a mediator before the situation creates huge consequences beyond anybody’s control.

Ukraine is facing its worst crisis in decades as citizens fight over whether to look toward Europe or improve ties with Russia. Pro-Russian separatists control about a dozen eastern Ukrainian towns and cities, demanding the right to vote on whether to split with Ukraine and join Russia.

A similar referendum in Crimea in March led to the Russian annexation of the Ukrainian peninsula and the current crisis.

Russia’s Foreign Ministry is calling on Ukraine to withdraw its troops from the east and open talks on ways to resolve the political crisis.

Interim Ukrainian Prime Minister Arseniy Yatsenyuk accuses Russia of seeking to destroy Ukraine by engineering what he says is a “well-planned provocation” against the government.

Russia says the new Ukrainian government is controlled by anti-Russian nationalists and neo-Nazis. It says it has the right to protect Russian speakers. 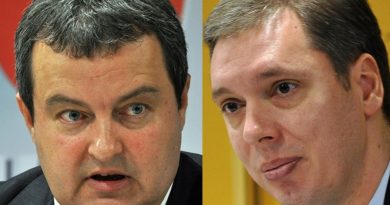