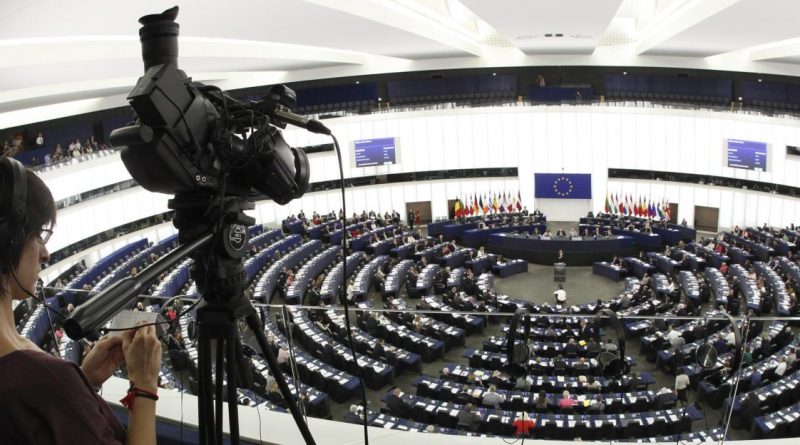 Members of the European Parliament voted on November 23 to adopt a resolution calling Russia a state sponsor of terrorism and a state which uses means of terrorism.

The vote on the final version of the resolution, at a European Parliament plenary session in Strasbourg, was 494 in favour, 58 against, with 44 abstentions.

The resolution reiterated unwavering support for the independence, sovereignty and territorial integrity of Ukraine, within its internationally recognised borders and condemnation of Russia’s illegal, unprovoked and unjustified war of aggression against Ukraine.

It said that Russia’s attacks and atrocities against Ukraine’s civilian population amounted to acts of terror against the Ukrainian population and constituted war crimes.

It also called on the EU and its member states to initiate comprehensive international isolation of Russia.

The resolution called for the Russian state-backed Wagner Group and the “Kadyrovites” as well as other Russian-funded armed groups such as those active in occupied areas of Ukraine to be included on the EU list of persons, groups and entities involved in terrorist acts.

It called on EU leaders to swiftly complete work on a ninth sanctions package, ensure swift enforcement of all sanctions and prevent, investigate and prosecute any circumvention of sanctions.

MEPs called for the list of individuals targeted by sanctions to be expanded to include those involved in forced deportations, forced adoptions of Ukrainian children, the illegal “referendums” in the Luhansk, Kherson, Zaporizhzhia and Donetsk regions, and the illegal “elections” in Crimea and Sevastopol, as well as all members of State Duma parties who hold offices in elected parliaments at all levels, including at regional and municipal levels.

Other steps called for in the resolution include, among others, a ban on the direct or indirect import of diamonds from Russia, for Russia and Belarus to be put on the EU’s high-risk third country list on anti-money laundering and countering the financing of terrorism, an immediate and full embargo on EU imports of Russian fossil fuels and uranium, “and for the Nord Stream 1 and 2 pipelines to be completely abandoned, in order to stop financing Russia’s war of aggression”.

The resolution called on the EU and its member states to prohibit the public use and display of symbols connected with Russia’s military aggression and war crimes in a way that expresses support for or justifies those activities.

MEPs called for renewed support for the ongoing independent investigations of war crimes and crimes against humanity committed by Russia.

They called on the European Commission and EU countries to work towards the establishment of a comprehensive international compensation mechanism, including an international register of damage, and actively cooperate with the Ukrainian authorities on it.

The resolution “calls on the Council and the Member States to urgently and significantly increase their political, economic, financial, military, technical and humanitarian support for Ukraine in order to help Ukraine defend itself against the Russian war of aggression and against Russian attempts to destabilise Ukrainian state institutions, undermine the country’s macroeconomic stability, and destroy critical infrastructure in the areas of energy, communications, water and transport, and civilian infrastructure in the areas of education, health and culture”.

They denounced the Russian occupation of the Zaporizhzhia power plant aimed at terrorising the Ukrainian population and condemned Russia for making power plants military targets.

MEPs emphasised that Russia’s current war of aggression against Ukraine “highlights the need for a thorough historical and legal evaluation of and a transparent public debate about the crimes of the Soviet regime, most importantly in Russia itself, because a lack of accountability and justice only leads to the repetition of similar crimes”.

EU urges Serbia to persist in dialogue with Priština