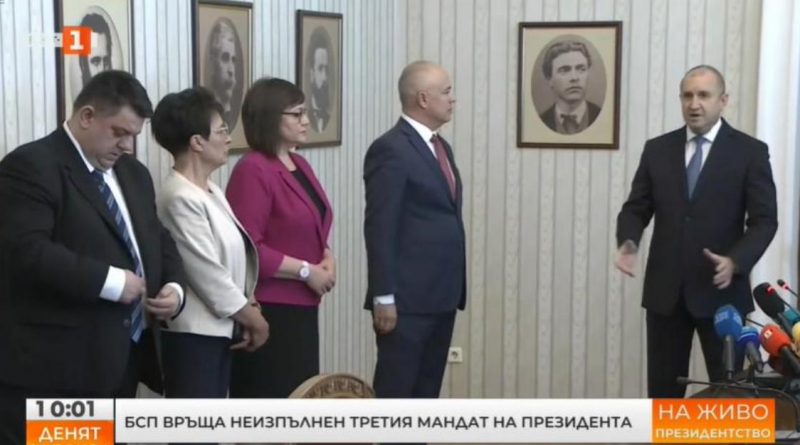 Bulgaria may be sweltering in soaring July temperatures, but in President Roumen Radev’s office, the atmosphere was icy as the Bulgarian Socialist Party (BSP) handed back to him the third and final mandate to seek to form a government.

Before and after the July 28 brief meeting in Radev’s office, the BSP accused Radev of being part of the group that ousted the government.

With the final mandate having proved fruitless, it is now in Radev’s hands to dissolve Parliament, appoint a caretaker government and decree a date for elections.

At the ceremony, televised live, BSP parliamentary group leader Georgi Svilenski told Radev that the BSP had made every effort to come up with a government within the current Parliament.

“We drew up a management programme, but unfortunately (Slavi Trifonov’s party) ITN withdrew support from the legislative programme, which was removed from the agenda of the Bulgarian Parliament yesterday,” Svilenski said.

Earlier this week, the BSP had made proceeding with naming a candidate Prime Minister conditional on Parliament voting support for the programme.

“The BSP has decided not to name candidate for Prime Minister and we are returning the mandate as unfulfilled,” Svilenski said.

Solemn-faced, Radev congratulated the BSP on the efforts it had made, but quickly went on to say that together with the unfulfilled mandate, the governing coalition was bequeathing “chaos” in the energy sector.

Radev appealed to MPs to find a solution regarding the head of the energy regulator “even today”.

He was referring to last week’s ruling by the Constitutional Court that the election of the head of the Energy and Water Regulatory Commission (EWRC) had been unconstitutional.

On July 28, Parliament was discussing returning the predecessor of the ousted head of the EWRC to chair the regulator.

BSP leader Kornelia Ninova reiterated to Radev that the party had made every effort to form a government and fully understood the burden of the energy regulator not functioning in the coming difficult months.

“We were accused of withholding the mandate to stay in power for another week, which is not the case. We are just concerned about the situation in the country and wanted the negotiations to continue until the EWRC issue is resolved,” Ninova said.

Radev’s invitation to the BSP to sit down was ignored. When Ninova, in effect, asked Radev how long he intended leaving Parliament in place, he ignored the question.

Ninova, speaking to reporters after the meeting with Radev, said that the 79 items of legislation included in the programme agreed by the three remaining groups in the ruling coalition would have, if adopted, eased the lives of Bulgarians.

She said that GERB, ITN, the Movement for Rights and Freedoms and Vuzrazhdane – the groups that had prevented Parliament voting on the programme – had thrown the state into chaos through what she called their cynical irresponsibility.

Ninova said that it was likely that Radev would not leave Parliament in place to work.

“The President has never stopped criticising the Cabinet, even though he created the main party in it,” she said, referring to We Continue the Change (WCC), the party founded by Kiril Petkov and Assen Vassilev, who were members of the first of two caretaker governments appointed by Radev in 2021. Radev swiftly estranged himself from Petkov and Vassilev and the government formed in December 2021 with the mandate held by WCC.

“Together with GERB, the MRF and Vuzrazhdane, they didn’t even give us 100 days. We think that he is part of the group that overthrew the current government,” Ninova said.

She said that already last week, the BSP had raised the alarm about how serious the problem with the EWRC was, but no one had believed them, and what followed were reproaches, sarcasm and accusations that they were holding the mandate for another week in order to hold on to their seats. Ninova was referring to, among other things, vulgar and abusive posts on Facebook by Trifonov.

“A week later, everyone understood the gravity of the situation. We do not accept the President’s criticism that we are leaving the country in chaos,” Ninova said.

She said that that criticism should be addressed to ITN and the Energy Minister, who was appointed to the December 2021 coalition government from the ITN quota.

“There is no way that we can elect the chairman of EWRC in two days and the President knows that very well,” Ninova said.

She said that Radev was in a hurry to get back into power. 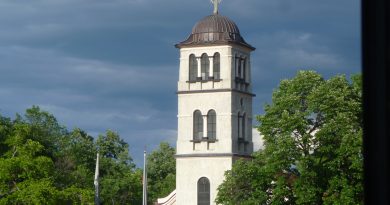