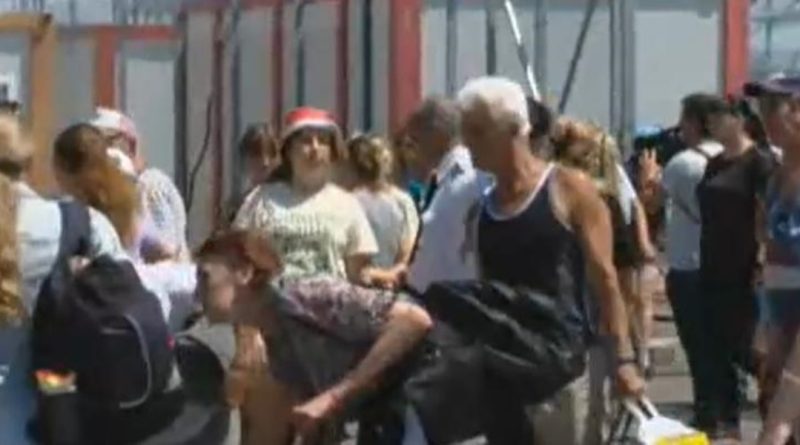 There were tensions among Ukrainian refugees at Bulgaria’s Elhovo “buffer centre”, with complaints about a lack of water, food for children and uncomfortable accommodation, reports on June 1 said.

On May 30, Bulgaria’s government abandoned the first version of its plan to relocate Ukrainian refugees, with the end of the 40 leva per person per day state support scheme for hotels accommodating refugees. The plan was abandoned after Ukrainians withdrew from it in large numbers.

Instead, those Ukrainians seeking accommodation from the state are first being processed via the “buffer centres” in Elhovo and Sarafovo.

Reports from Elhovo on June 1 said that many of the Ukrainian refugees refused to enter the accommodation in the temporary distribution centres, because of the conditions in them, instead staying for hours in the buses that had brought them.

Bulgarian National Television (BNT) said that more than 560 Ukrainians were accommodated at the Elhovo centre.

On the night of May 31, many left because they were dissatisfied with the conditions.

Some left by taxi, while others went to the Elhovo bus station, intending to return to Bourgas on Bulgaria’s Black Sea coast to seek out accommodation for which they would pay at their own expense.

BNT said that tensions erupted at the centre after buses began arriving to move the most vulnerable – mothers with children younger than three, and people with disabilities.

Chaos ensued when it was not clear to the Ukrainians who should go where and what their destination was.

Nova Televizia reported one Ukrainian saying: “Organisation – zero, information – zero. Nothing. We got off the bus and they left us”.

Another told Nova that he was leaving. “Do you think that people can stay here, after the war? I don’t think so. Our children are scared”.

One of the Ukrainian women took a different view.

“We are very grateful to Bulgaria for receiving us. We lived for two months in Golden Sands in a luxury hotel…We are happy that we are not at the war, that we are under a peaceful sky. We see that we are protected. There are cameras with video surveillance. Our children live in peace. Thank you”.

BNT said that people with disabilities would be moved to accommodation at Stara Zagora mineral baths, while the mothers with small children would be accommodated at a former socialist-era camp in Yastrebino. Lists have been made so that families are not separated, the reports said.

State Agency for Refugees head Mariana Tosheva said: “Currently, the lists that were started in the morning are being supplemented so that we can make a filter for the most vulnerable people who have fallen into the buffer centre to go to the right place – retirees, people with children over three who could wait another night here and the fourth list, a small one, we have a dozen people who came by car”.

Tosheva said that four buses provided by the Transport Ministry were travelling from Plovdiv to collect those who were to go to Yastrebino and Stara Zagora.

Bulgarian National Radio (BNR) said on June 1 that 20 tents, each able to accommodate 20 people, had been set up at Sarafovo. They were still empty.

Ordinarily, the Sarafovo facility is a holiday complex for Bulgaria’s military personnel.

BNR said that social services had begun transporting food to the complex and unlike the situation at Elhovo, no one had expressed dissatisfaction and refused to stay there.

If places in Bourgas run out, the refugees would have to go on to Elhovo, Yanev said.

In two days in Bourgas district, more than 320 Ukrainians with disabilities had been moved to a government holiday accommodation facility, he said.

Bulgaria’s Labour Minister: More than 61 000 lost their jobs since State of Emergency began

Covid-19 in Bulgaria: Number of active cases fell in past 24 hours