Bulgaria’s economy grew by 4.3 per cent in the third quarter of 2020, the National Statistical Institute (NSI) said in a flash estimate on November 13. In real terms, gross domestic product (GDP) in Bulgaria in July-September was 31.22 billion leva, or 15.96 billion euro.

In annual terms, the economic drop in the third quarter was 5.2 per cent, compared to the same period of 2019. NSI is due to announce preliminary growth figures for the quarter on December 4.

The State of Emergency remained in force until May 13, when it was followed by the declaration of an epidemic. That declaration has been extended repeatedly and remains in effect, with restrictions re-introduced recently due to the rising number of coronavirus infections in the country.

The flash estimate’s seasonally-adjusted data showed domestic consumption rise by 9.8 per cent during the third quarter, and it was 9.3 per cent higher on an annual basis. Gross fixed capital formation rose by 4.3 per cent in July-September, but was 5.7 per cent down compared to the third quarter of 2019.

Exports were flat compared to the second quarter (but were 22.3 per cent lower compared to the same period of 2019), while imports rose by 22 per cent (3.4 per cent down on an annual basis). The country recorded a trade surplus of 778.3 million leva in the quarter, the equivalent of 2.5 per cent of GDP, NSI said.

Bulgaria was one of 20 EU countries to record economic growth during the third quarter of the year, according to the bloc’s statistics body Eurostat, as the EU economies bounced back with the lifting of restrictions put in place to limit the initial spread of the coronavirus.

The EU economy as a whole rebounded 11.6 per cent in Q3, following the 11.4 per cent decline in the previous quarter, while the euro zone economy was up 12.6 per cent, having fallen 11.8 per cent in Q2, according to Eurostat’s flash estimate.

These were by far the sharpest increases observed since Eurostat started tracking the indicator in 1995, the statistics body said, coming on the heels of the biggest quarterly drops in the same time period.

In annual terms, however, the EU economy declined by 4.3 per cent compared to the third quarter of 2019, while the euro zone economy was down by 4.4 per cent. 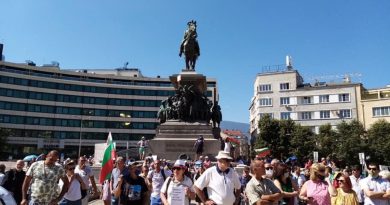 Bulgaria: Defeat of no-confidence motion has no bearing on anti-government protests