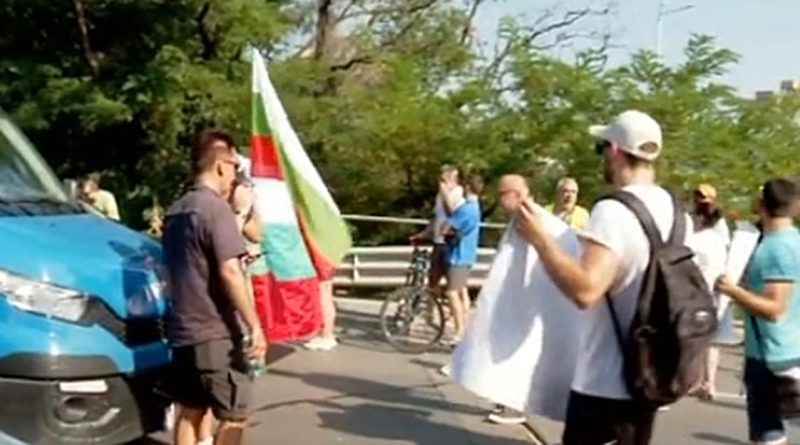 Protesters in Bulgaria demanding the resignation of the government and the Prosecutor-General blocked major thoroughfares in Sofia and other large cities on July 29.

This was not the first time in this series of protests, now in their 21st day, that thoroughfares have been blocked, but the scale of the traffic disruption was larger.

In Sofia, in contrast to earlier days when handfuls of protesters blocked intersections late at night, the disruption began in the early afternoon.

Traffic was blocked for several hours in Dondukov and Tsar Osvoboditel boulevards, at Eagle Bridge and outside Sofia University St Kliment Ohridski.

In the Black Sea city of Varna, a group of protesters obstructed traffic at Asparuhov Bridge, across which traffic to and from the southern Black Sea coast passes. Television footage showed outraged motorists complaining about the disruption, as the queues of cars grew longer.

In Bulgaria’s city of Plovdiv, two major boulevards were set for shutdown on the evening of July 29, for an organised procession, the municipality said.

In Stara Zagora, a motorcade of protesters, driving at deliberately extremely slow speed, obstructed traffic in the city.

A protest rally demanding the resignation of Prime Minister Boiko Borissov’s Cabinet and Prosecutor-General Ivan Geshev began at 7pm in central Sofia, with organisers saying that after the rally, they would set up tents outside the Cabinet building and would remain there until the government and Geshev resigned.

A separate event, organised by Bulgaria’s Justice for All Initiative, was scheduled for 7.30pm outside the Palace of Justice. It marks a year of demonstrations against the election and actions of Geshev.

In a video posted on Facebook, Borissov said that everyone has the right to demonstrate, but not to prevent people from moving on the roads and to block intersections.

“Elections are coming, everyone will be able to vote. This is democracy. Imagine we lose the election and start shutting down crossroads. Is that democracy?” Borissov said.