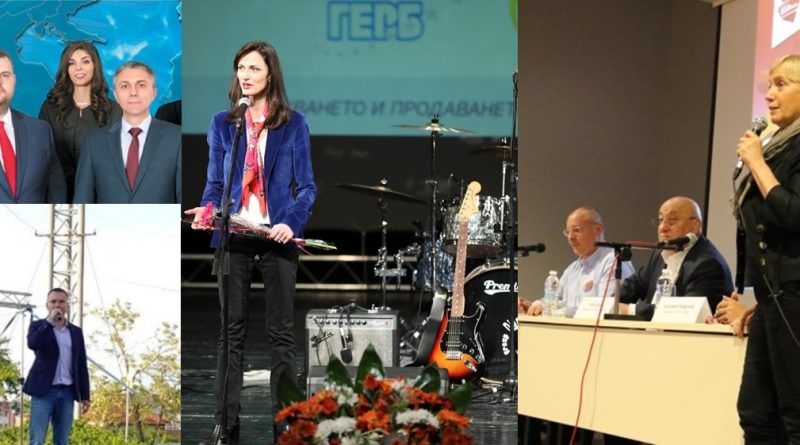 Slouching towards Brussels – or Strasbourg, the other seat of the European Parliament – competitors in Bulgaria’s May elections for the EU legislature are nearing the close of campaigns that hardly ever began, so low-key they have been.

On the final Sunday before the May 26 vote, Prime Minister Boiko Borissov’s centre-right GERB party held a large-scale event, the only one since the launch of a campaign that has been at most desultory.

Featuring Manfred Weber, the principal candidate of the EU-wide European People’s Party of which GERB is a member, and a cast of thousands to fill the hall, the event was given a dose of optimism by a party leader and Prime Minister who has been otherwise somewhat beleaguered of late.

Borissov spoke of a new phase of building Bulgaria, and pointed to GDP growth, reduced foreign debt and increased exports. Mariya Gabriel, the current European Commissioner who is the lead candidate on the GERB list, spoke of how Borissov had been building Bulgaria’s image these past 10 years.

Weber spoke of how GERB’s MEPs had ensured that Bulgaria’s voice had been heard in the European Parliament these past 10 years.

Tsvetan Tsvetanov, the GERB election campaign chief whose presence on the party stage has been otherwise somewhat diminished of late after he became one of the ruling majority politicians to fall victim to the controversies over real estate acquisitions, thanked the party’s MEP candidates for visiting all 250 municipalities in Bulgaria in the course of the campaign.

If Tsvetanov was quoted correctly, he is wrong. Bulgaria has 265 municipalities, so either they went to all 265 or 15 were not graced with their presence.

But that besides, Tsvetanov’s statement is an indication of how the major parties have run their campaigns – largely at low level, trudging from one small venue to the next, engaging small groups, delivering pat remarks in town squares to the local party faithful or the vaguely curious.

The campaigns, of course, also have been conducted on social networks, and in the broadcast and internet media. Facebook users in Bulgaria would have seen, recently, politicians earnestly addressing them in little videos, or at least, the preview of such. To what extent anyone clicked to play is another matter.

On television, the slots set aside for paid coverage of election events have tended to be dominated mainly by spending by GERB and the Movement for Rights and Freedoms, as well as a few lesser parties whose chances of seeing the interior of the European Parliament would require a visitor’s ticket.

The paid coverage videos have tended to run to the rather dull, almost as if the larger parties – those certain of seats – have not been genuinely interested in a high voter turnout, but rather the lower one that would benefit them (and this is on top of the fact that May 26 will come at the close of a three-day weekend, which will in turn dampen turnout).

Thus we have seen, for instance, Mariya Gabriel earnestly addressing small clusters of people in various smallish venues, often on the topic of the glorious digital future which is her European Commission portfolio.

MRF leader Mustafa Karadayi, who is the party’s lead candidate, has been trailing through various villages in the party heartland, resulting in evening videos characterised by a soporific sameness.

The scenario in the Karadayi videos tends to always include a large number of the MRF’s other MEP candidates lined up on stage behind him. With one exception – number two on the party’s European Parliament candidate list, Delyan Peevski.

Peevski has been the subject of complaints and media reports alleging him to be ineligible as a candidate for failing to meet statutory residence requirements for candidacy. The Central Election Commission has rejected these complaints, on the grounds that Peevski, technically, has a registered address in Bulgaria. The reports also have highlighted that in the life of the current National Assembly, Peevski has registered as present all of once, the day of its first sitting, in 2017.

Wherever Peevski is, he has not been seen, or at least filmed, on the MRF’s campaign trail. He does appear on the MRF’s website depiction of its MEP candidates, standing in a grinning group. Would it to be too unkind to suggest that the array of candidates was the result of a Photoshop compilation?

One tends to hear the same message from head of state President Roumen Radev, the government critic who was elected on a BSP ticket; name an issue, point to the failure. GERB lodged a complaint to the CEC against Radev, alleging that he was participating in the election campaign, given his routine attacks on the ruling majority. The CEC said that he was not, campaigning that is.

The complaint against Radev was something of a tit-for-tat. A BSP line has been that Borissov is campaigning, and using state resources to do so. In two successive complaints, the BSP asked the CEC to tell Borissov either to step down as Prime Minister or as head of the GERB election staff (the latter post one that, technically, he does not actually occupy). The CEC rejected these complaints, effectively finding that Borissov was not campaigning.

Borissov has been filling his days meeting people of importance, the Pope included, and inspecting things, generally somehow involving asphalt. He has been announcing various things, including future pay-rises, and effective government bail-outs for various institutions. The fine line between the legitimate exercise of government, and its head talking about what it is up to, and campaigning, is difficult to discern.

GERB and the BSP hardly have not been the only ones complaining.

A visit to the CEC website, which regularly posts its decisions on various matters, shows quite the list of various media that have been found to be in violation of campaign rules, usually for failing to identify paid content as such. Broadcast media have been the main culprits, perhaps because skullduggery by internet media is slightly more difficult to identify as such.

Other complaints upheld have included those against Vesselin Mareshki, the leader of the Volya party, currently the smallest in the National Assembly and seen by pollsters as having no chance of a seat in the European Parliament. The CEC has found against Mareshki for, among other things, campaign materials failing to meet the requirement of being taken up to a 10 per cent share with the statutory message “Buying and selling votes is a crime” (sic; that is a literal translation from Bulgarian, and yes, in past elections, grammarians have complained); for Mareshki using unacceptable language in respect of other candidates; and for illicit use of state symbols in campaign materials.

Valeri Simeonov’s party has lodged a complaint about the MRF using children in campaign materials, and using the Turkish language in campaigning (under Bulgarian election law, campaigning in a language other than Bulgarian is unlawful).

The CEC already has upheld a complaint from another ultra-nationalist grouping, VMRO-BND, about Karadayi speaking in Turkish, detailing in its complaint just where on the MRF site and Facebook video examples could be found. The CEC ordered the videos taken offline, and Karadayi fined.

The matter of fines is, well, another matter. Procedurally, if the CEC finds that a candidate, party, coalition or media outlet has broken the rules, it then passes on to the relevant institution a formal request to impose a fine. The scale of these fines generally takes quite some time to become clear, but often they run to the fairly nominal, which may explain why breaches tend to be fairly routine.

May 26 will again see the discrepancy between the intention and letter of Bulgarian election law. The Electoral Code forbids the publication of exit poll results while voting is still proceeding. However, it has been legally upheld that this bar applies only to formal media, not social networks, so it has become common practice for some media to use their Facebook pages to post exit poll results throughout the day.

So obvious has this anomaly become that in recent months, there was a move in Parliament to change the law to simply allow the publication of exit polls even though voting was still proceeding. This amendment was defeated, meaning that next Sunday, there will be slight increases in traffic to the Facebook pages of some Bulgarian media.

Battle looms in Bulgaria over next changes to security services