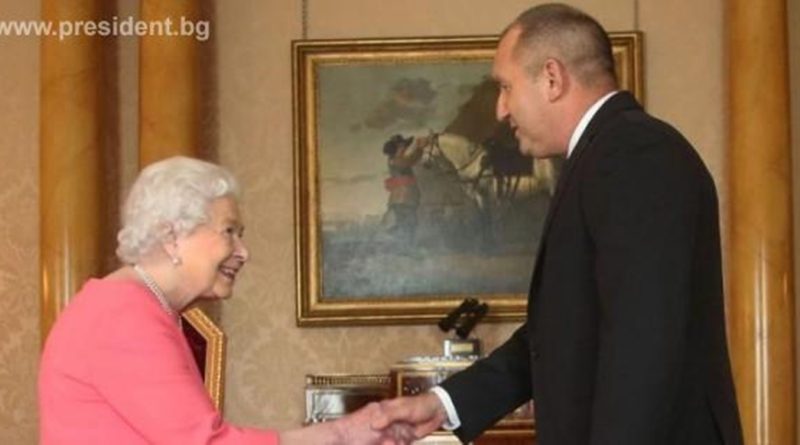 On a visit to London, Bulgarian President Roumen Radev met Queen Elizabeth II on October 18, inviting her or a member of the royal family to visit Bulgaria in connection with the 140th anniversary of diplomatic relations between Bulgaria and the UK in 2019.

At 92, Queen Elizabeth now does not undertake foreign travel. Her last visit abroad was to Malta in 2015.

According to a statement by the President’s office, Radev said that the invitation to an audience with the Queen was a sign of the friendly relations between the two countries.

Speaking after the 40-minute audience, Radev said that relations between the European Union and the UK are important for both parties and the preservation and development of close relations is a common goal.

“The highest priority must be the preservation of citizens’ rights on both sides,” Radev said.

Radev is the fourth democratically-elected head of state of Bulgaria to be received in audience by Queen Elizabeth. The others were Zhelyu Zhelev, Petar Stoyanov and Rossen Plevneliev.

Bulgarian Prime Minister Boiko Borissov, in Brussels for a meeting of the European Council, said on October 18 that he saw February 28 as the key date in Brexit negotiations.

Borissov said that once December was reached, “we’ll have five, six, eight weeks left to to reach a solution”.

On October 17, speaking before the European Council meeting began, Borissov said that he hoped that the scenario of a no-deal Brexit could be avoided.

“It is extremely important for the Bulgarian citizens living in the UK and for the British citizens who live in Bulgaria – that’s more than 14 000 people, to find the best possible outcome for everyone because the emotion is strong, the British have left, not us, but that’s their choice.”