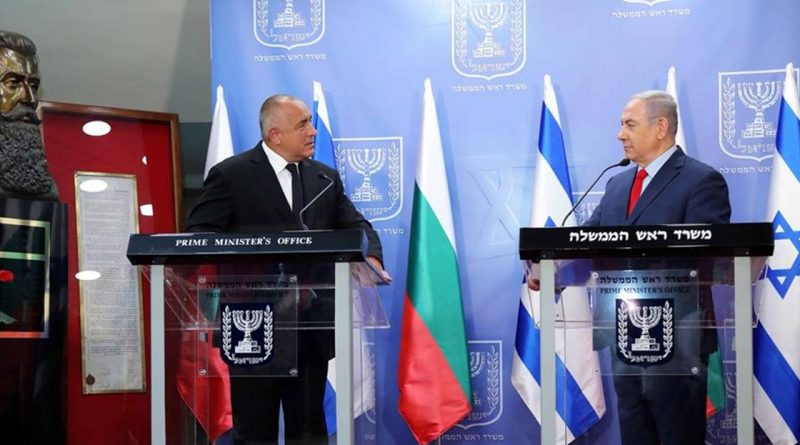 Bulgarian Prime Minister Boiko Borissov and his Israeli counterpart Benjamin Netanyahu have discussed the possibility of their countries getting involved in defence industry co-production, Borissov said on June 12 during a visit to Israel.

“For me, Israel is an extremely important factor for security and stability in the Middle East,” Borissov said.

Borissov praised Netanyahu “a global leader who can lead a moderate and balanced policy”.

He said that Bulgaria could boast successful co-operation with Israel in security, medicine, new technologies, and other areas.

Borissov said that the exchange of good practices between the two countries was particularly successful in the security sector. He cited the example of joint training exercises for Bulgarian and Israeli Air Force pilots.

He said that currently, Bulgaria and the Bulgarian people had to face very difficult decisions, but history remembers such a decision which could be defined as an achievement.

Borissov was referring to the rescue of the Bulgarian Jews from being mass-murdered in the Holocaust.

“With the rescue of the Bulgarian Jews from deportation, our country has opposed a terrible machine, which at that time was fascist Germany,” Borissov said.

He thanked Netanyahu for saying that Israel would never forget the heroism of the Bulgarian people.

“We will always be grateful to Bulgaria, whose citizens lay on the railway lines to prevent the deportation of the Bulgarian Jews. We appreciate your efforts to fight anti-Semitism, radical Islam and terrorism,” Netanyahu said.

Netanyahu said that Israel had always felt Bulgaria’s support in international relations over the years.

He said that the active political dialogue between him and Borissov was also beneficial for relations between the two countries.

About 1.1 million people born in Bulgaria are living abroad, mainly in Turkey, EU and US – study