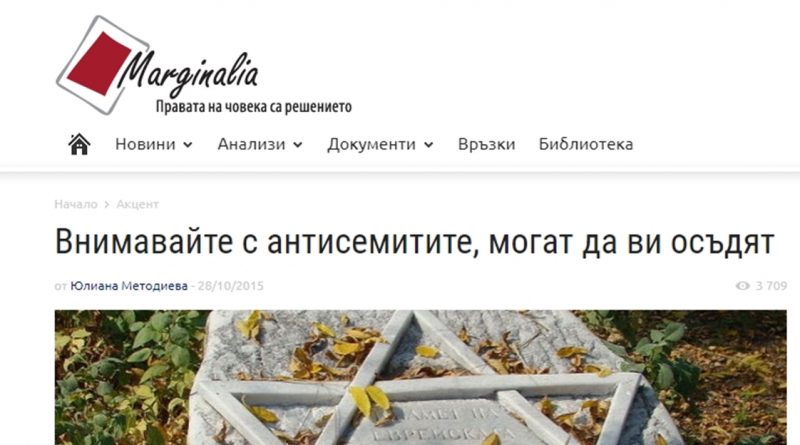 Retired Bulgarian politician Dyanko Markov, 95, is continuing to pursue editor Yuliana Metodieva through the courts for calling him an anti-Semite. This is the third court case after he lost the first two.

Markov was a member of the Union of Bulgarian National Legions, headed by Hristo Lukov – the general whom far-right and neo-Nazi supporters honour annually in a controversial march through Sofia. In its early years, Markov turned out in support of this march, insisting that Lukov was a patriotic hero, not a fascist. He repeated that insistence about the Legionnaires in a book he wrote.

Three times a member of Bulgaria’s National Assembly on the ticket of the centre-right Union of Democratic Forces coalition, Markov spoke in a July 2000 debate in the House amid controversy over the events of March 1943, when Bulgaria rescued Bulgarian Jews from the Holocaust, while Jews in the “new lands” under Bulgarian administration were handed over to the Nazi death camps.

That debate took place against a background of a reversal of the honouring of Bulgarian Tsar Boris III in a memorial garden in Israel. Opinions are deeply divided about the role of Boris in the events of 1943. Some see him as a hero in the rescue of the Bulgarian Jews; others see him as complicit in the mass murder of the 11 343 Jews from the “new lands”.

According to a transcript of the National Assembly sitting, Markov – referring to the deportation of the Jews from the “new lands” in northern Greece and Yugoslavia – said: “The deportation of an enemy population is not a war crime. The United States deported the Pacific coastal population of Japanese origin during the Second World War. And no one gave a damn about it”.

Markov went on to say that the Bulgarian people could not have resisted when the German command had given the order for the deportation of the Jews from the “new lands”.

This is a frequent point of dispute in looking on this period of history. While the order, like all other orders that came from Berlin that led to the murder of more than six million Jews in the Holocaust, came in terms of the Final Solution policy, it was Bulgarian police and army who implemented the roundup and deportation of the Jews in the “new lands” – an issue that the country continues to grapple with, in this 75th anniversary year in which the country commemorates not only the rescue of the Bulgarian Jews but also the deportation of the 11 343 from northern Greece and Yugoslavia.

Fast forward to 2014, at which point Markov participated in an event at the European Parliament at which he was billed as an anti-communist hero. This prompted Yuliana Metodieva, a human rights activist and editor-in-chief of the human rights news and features website Marginalia, to write an open lettter protesting against Markov’s participation. The letter was signed by the board of Marginalia, including academics, among them historians.

The series of court battles began, in which a high-water moment was when Metodieva posted on Marginalia’s website a story under her own byline headlined (in translation) “Be careful of anti-Semites, they can sue you”.

The court case, as with its subsequent iterations, became a stage not only for the legal question of whether Markov was justified in claiming damages for defamation, but also a platform for debate about the vexed questions in this period of Bulgaria’s history. In the course of proceedings, Markov’s legal counsel deployed a historian, as well as a letter from a group of Bulgarian Jews testifying that they did not believe Markov to be an anti-Semite.

The court did not agree, and dismissed the case against Metodieva and her co-defendants. A second court case also failed. Now the third is underway.

The next scheduled hearing in the court case, on April 16, takes place with the 2018 Lukov March, the 15th of its kind, a recent memory. Metodieva, who with her Marginalia colleagues has a track record of standing up for minorities in Bulgaria including the country’s Jews, was instrumental in organising a conference at Sofia University under the banner “Sofia says no to hatred”. Speakers included the mayor of the city, Yordanka Fandukova, who repeatedly has issued a ban against the Lukov March, only to be defeated in court.

The wider context is concern, expressed not only by the Organization of the Jews in Bulgaria “Shalom” but also by political forces on the left and centre-right of the Bulgarian spectrum, about the spectre of anti-Semitism in the country. Bulgaria is by no means the worst country in Europe when it comes to anti-Semitism, but is not free of it either, and the Lukov March is seen by most as a disturbing manifestation of reverence for a figure whose legacy runs counter to the traditions of ethnic and religious tolerance on which the country prides itself.

Metodieva, in an e-mail series of answers to questions from The Sofia Globe, says that the Bulgarian Democratic Forum founded by Markov had in its original charter the assertion that it was a successor to Lukov’s Union of Bulgarian National Legions. She adds that Markov, as noted above, had insisted that Lukov was a “patriot”.

(That insistence, that Lukov was a patriot and not a pro-Nazi fascist, continues today among the organisers and supporters of the march that honours him. Lukov was assassinated by communist partisans in February 1943. There is a theory that they did Boris III a favour; there are allegations that Hitler’s Germany intended deposing Boris to replace him with Lukov, who would have been more enthusiastic about implementing anti-Semitic measures. Boris, in turn, would die in August that year, after a return from a visit to Berlin, after having incurred Hitler’s wrath for his continued refusal to deploy Bulgaria’s military against the Soviets, and the “failure” in Sofia to deport the Bulgarian Jews).

Metodieva admits that she is vulnerable should the current court make a decision out of line with the two previous court decisions. As those familiar with Bulgaria’s court system would point out, judges tend to make individual decisions, rather than – as would be the case in Western jurisprudence – being bound by the precedents of decisions made by other benches.

Metodieva notes that in previous court hearings, offers of out-of-court settlements have been made, which she consistently has refused, being convinced of the correctness of her case. Her colleagues at the human rights group the Bulgarian Helsinki Committee, of which she has been an instrumental figure since its founding, are prepared – in the event of an adverse decision by the current court – to take the matter all the way to the European Court of Human Rights.

The Organization of Jews in Bulgaria “Shalom” is backing Metodieva in her contest with Markov, and intends a public show of support at the next court hearing.

Metodieva points to various instances of the history of the 1940s period in Bulgaria being re-interpreted and manipulated in some quarters.

On the wider topic of the courts and cases of anti-Semitism, Metodieva says “I am not optimistic about the will of the judiciary to pursue anti-Semitism and the denial of the Holocaust in Bulgaria”.

Metodieva, some years ago, entered suit against Volen Siderov, leader of the ultra-right party Ataka, who had told an election rally that various minorities, including Jews, should be thrown out of Bulgaria. The court upheld her action at the first instance, and another court acquitted Siderov at the second.

“Six years ago, texts on Holocaust denial were transposed in the Criminal Code, but there has been no visible movement in the prosecution circles in Bulgaria on this issue.” Metodieva said.

She told The Sofia Globe that as a journalist and researcher, she was strongly provoked by revisionism about Bulgarian history in the 1940 – 1944 period, in the years that had followed 1989 and the advent of democracy.

“I am conducting a quantitative and qualitative analysis of historical publications, books of prominent writers, media from the post-communist period. It is very indicative of the will of politicians, historians and journalists to conceal the shameful fact that Bulgaria was a country that collaborated,” Metodieva said, referring to the 1943 deportations from the “new lands”.

“I think that my case with Dyanko Markov is a symptom of the voluntary refusal of memory and aggressive behavior against those like me who want to illuminate the truth,” she said.