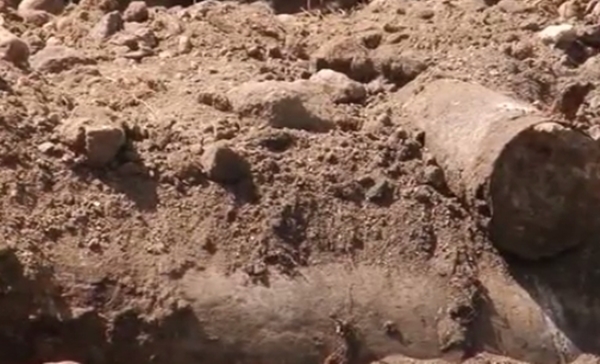 Residents of Plovdiv’s Trakiya residential district have had a few days of anxiety after a succession of unexploded bombs was uncovered by workers digging near two large blocks of flats.

Opinions vary about the age of the bombs and how they came to be there, though local media have quoted some of the older residents of the area, and military historians, saying that the site used to be an airfield up to the 1980s.

One report said that the bombs dated from World War 2, though it appears that those found were from a storage facility and did not arrive by being dropped from on high.

Ten military shells have been found in the past two days, four aerial bombs and six other shells.

District mayor Kostadin Dimitrov called on residents to be calm, saying that all necessary precautions had been taken and there was a “constant presence” of law enforcement and military specialists.

Soon after the first finds, people were evacuated from nearby buildings and the area was cordoned off. The bombs were removed to be disposed of elsewhere.

On the morning of May 5, Nova Televizia reported from the scene that in spite of the assurances, there was no one in the area. “The area is still open and there are no police guarding it,” the report said.

Some of those living in nearby flats had temporarily moved out to stay with residents, the report said.

Shopkeepers were angry that they were incurring losses because of the evacuation and the previous order to close their shops.

Dimitrov told media in Plovdiv that he expected that there would be at least one more check by experts and the police, to see if any other explosives remained, but it was not clear when this would happen.

“Still, people worry. This is normal given that there are bombs near their flats,” he said.

Local media said that “experts” had advised that there was nothing to worry about. Even though the ammunition had been underground for 40 years, none had a detonator.

On Thursday, a special radar for detecting objects underground was used in the area.

On May 5, Bulgarian National Radio reported military historian Boris Kodikov as saying that there had been airport warehouses in the area up to the 1980s. When the facility was closed down, someone clearly had not done his job to ensure that all material, including potentially dangerous items, had been cleared away.

Architect Petko Prokopiev told BNR that the finds were the result of the “mentality of the 1980s”.

Prokopiev said that it was impossible that this kind of material would not have been found during the building of the blocks of flats. But nothing had been said about it, he said.