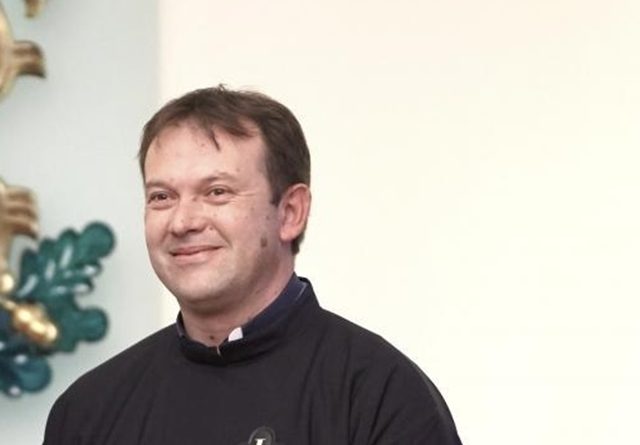 Father Paolo Cortese, the Roman Catholic priest recalled from Bulgaria after getting death threats for sheltering a Syrian refugee family, has challenged Bulgarian Orthodox Church head Patriarch Neofit and President Roumen Radev to speak out on the issue of protecting refugees.

Cortese gave an interview to Hristo Hristov’s desebg.com outside Sofia’s landmark Alexander Nevsky cathedral just as he was about depart from Bulgaria, called back to Rome by the Vatican over the threats to him and his church in the town of Belene.

In the interview, Father Paolo recalled that it was in March 1943 that Bulgarian Orthodox Church leaders Metropolitan Kiril and Exarch Stefan had taken a public stand against the plan to deport Bulgarian Jews to be murdered in Nazi Holocaust death camps.

His clear implication was that the same moral courage – that led to Bulgaria preventing the deportation of Bulgarian Jews, saving about 48 000 lives – was not on display today.

“I did not succeed to protect one peaceful family. Today Syrians are refugees. Seventy years ago, the refugees in Europe were the Jews. Tomorrow it could be us,” Father Paolo said.

The report noted that Cortese had worked tirelessly in recent years on the creation of a memorial at the former communist-era concentration camp in Belene and to honour the victims of the totalitarian regimes of the 20th century.

On his departure from Belene and Bulgaria, following the threats against him and the Syrian refugee family, he said: “In Belene, Bulgaria died, in Belene, justice died. I do not know whether the state institutions realise it, but Bulgaria has lost a lot from this”.

He said that he had exerted every effort to protect the Syrian refugee family and acted according to the laws of Bulgaria – the family arrived legally, were granted humanitarian refugee status and had the right to legal residence – but had failed. “For me, today is a very sad, mournful day.”

Asked what had caused this hatred and fear in Bulgarian society, and the negative attitudes towards people fleeing war and seeking peace and protection, Father Paolo said that it was difficult to say.

“We lost what we can find on the first page of the Bible – the tree of good and evil. We have lost the knowledge of what is good and what is evil. Where is ustice and where injustice. Where is honour and where is shame and disgrace. Where are the institutions and where are provocateurs.”

Today the law of the jungle was deciding the fate of people, not legitimate institutions and law-abiding citizens, he said.

“My call is for Bulgarian institutions to wake up. It cannot continue like this,” Father Paolo said.

“I want to turn to my friends and the good people in Bulgaria and tell them the following. Here, in front of Alexander Nevski church, 74 years ago, on March 10 1943, Metropolitan Kiril and Exarch Stefan themselves came to the square, for the saving of the Bulgarian Jews.

“Against them were the authorities and Nazi Germany. But the clerics faced them and refused to be silent. They were not frightened even by the Nazis and stood in defence of the Jews.”

“Where are you today, Patriarch Neofit? Come out of your castle. Take an honest and honorable position, as these, your brave predecessors Kiril and Stefan did. People need your word!

“Where are you, Mr. President Roumen Radev? Come out of your Presidency and speak to your people. Take the example of other leaders. Take the example of Martin Luther King and his dream of a society in which there is no discrimination, where all can live together. Talk to your nation that is taking the wrong path and entering the jungle.”

“Where are citizens of Bulgaria? Come out and show that you do not agree! Where are you Bulgarian institutions? Why not work so that the laws are observed? Protect justice!” he said.

He said that he did not want to see that people in Bulgaria choose to live by the law of the jungle.

“I appeal to all honrest and respectable Bulgarians in the country. Stay here, do not give up. Fight! Do not be afraid! The path of truth and justice is the only right way. Follow it, so that we have the right to say, ‘we are honest people, we are on the side of good’. I dream of this Bulgaria – the Bulgaria of the good winning,” Father Paolo said.