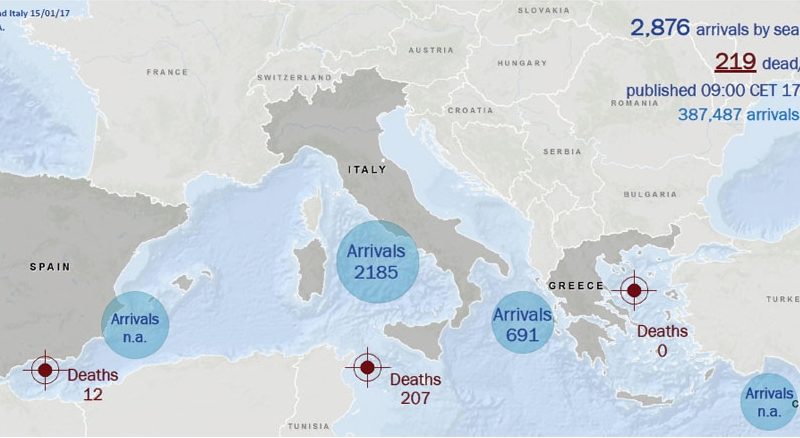 About 2876 migrants and refugees have entered Europe by sea in 2017, the International Organization for Migration (IOM) said on January 17 – with the death toll in the Mediterranean already estimated at 219.

There have been 219 estimated deaths, compared with 91 during the first two weeks of 2015. This fatalities figure is considered low by IOM’s Missing Migrants Project, which is investigating reports that surfaced over the weekend that would add at least 200 deaths to the total.

IOM Rome reported that staffers have had an opportunity to speak with four survivors of one tragic shipwreck that occurred on January 14 in the waters between Libya and Italy. There are reports that it was a larger boat which may have had more than 180 migrants on board when it capsized in rough seas 30 miles off the Libyan coast. Search operations in very poor weather conditions resulted in rescuers recovering few survivors as well as the remains of eight migrants. The search for survivors continued through the weekend and involved several ships, including Italian Navy vessels and a vessel operating under Operation “Triton”.

“While the circumstances of the shipwreck will be further explained when the survivors are brought ashore, it seems likely that this incident resulted in the death of over 100 people. We still do not know the nationalities or if there were women or children on board. It is a tragic start to the new year,” said Federico Soda, Director of IOM’s Coordination Office for the Mediterranean in Rome.
In a separate rescue operation this weekend, three migrants died from hypothermia in a dinghy rescued at sea. The bodies were brought to the Italian island of Lampedusa.

On Monday about 1100 migrants were brought to land by rescue ships patrolling the Mediterranean: 272 to Lampedusa, 244 to Augusta and 566 to Catania. The majority were Western African nationals.

Many survivors told IOM staff that they had attempted the dangerous sea crossing to flee violence and human rights abuses in Libya. They claimed to have no option but to put themselves in the hands of unscrupulous smugglers, who often forced them onto boats, despite the rough sea conditions.

“Many people have told us that when they get to the beach, those who change their mind and don’t want to go are forced to get on board, sometimes with violence,” Soda said.

Migrants departing from Libya now mainly travel in inflatable rubber dinghies which can carry up to 140 people, but are often unable to withstand rough seas. “Without the outstanding work of the Italian and international ships that save hundreds of lives every day, the number of missing migrants would be much higher,” said Soda.

IOM Morocco said on January 16 that its office was investigating reports of migrant fatalities on January 13 and 14.

On January 13, twenty-one migrants were reported missing off the coast of Tangier-Tarifa. They are believed to include two women and one infant. On January 14, a Congolese woman reportedly drowned in an incident off Nador. In a separate incident on the same day two men and one woman also went missing in the same area.

IOM Athens said on January 17 that Greek border guards using thermal cameras found the corpse of an adult man covered under a metre of snow near Feres on the Evros River.

The victim is believed to have been a migrant or refugee. Authorities also discovered two individuals they believe were smugglers and seven third-country nationals, one of them in sodden, frozen clothing. The man was taken to a hospital in Alexandroupoli and IOM Athens reports that he is out of danger.

On January 16, IOM Athens reported monthly arrival of migrants and refugees in Greece during December 2016. Arrivals on the islands of Lesvos, Samos and Chios saw the largest year-on-year declines. Just 1286 people arrived on the three Greek islands last month compared to 98 037 in December 2015.