Two former Constitutional Court judges have entered the controversy about whether Bulgarian President Rossen Plevneliev’s decision to not appoint a caretaker cabinet in his final month in office was constitutional.

Plevneliev addressed the nation on December 21 after an attempts to form an elected government in the current Parliament had failed.

“I did my best to avoid early parliamentary elections and until the last minute I hoped that the parties represented in Parliament would come up with a sustainable formula for forming a cabinet,” Plevneliev said.

“Such is the spirit of the constitution, this is a reasonable action, it is the European approach,” said Plevneliev, who said he saw no point in two successive caretaker governments with two successive presidents, which he said would be a sign of disunity and expose Bulgaria to being a laughing stock,

Kirov, a professor at Sofia University, said that it was a problem that a cabinet that had resigned continued in office, bearing no political responsibility to Parliament or the President.

Plevneliev had breached the constitution because the text of Article 99, clause seven, made it mandatory for him to appoint a caretaker government.

This clause, which comes at the close of the section on the mandate-offering process, says that “should Parliament fail to form a government within the established period, the President shall appoint a caretaker government”.

Kirov said that Plevneliev had abdicate his constitutional obligations and did not want to exercise authority.

Punev, on the other hand, argued that Plevneliev had not violated the constitution, and in offering to his successor Roumen Radev to appoint in his own name a caretaker cabinet chosen by Radev had taken a statesmanlike position (Radev, in his own televised statement, refused the offer and criticised Plevneliev).

The Plevneliev decision has been hotly debated in the past 24 hours, with politicians of the former governing majority defending it and figures from the socialist opposition accusing him of acting unconstitutionally, while it also has been argued by political commentators of the left and right, none necessarily having a qualification in Bulgarian constitutional law (and with some “experts” also being quoted in media reports, without being identified by name). 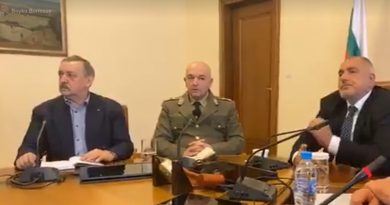 Bulgarian PM in video conference with 5 counterparts to discuss coronavirus