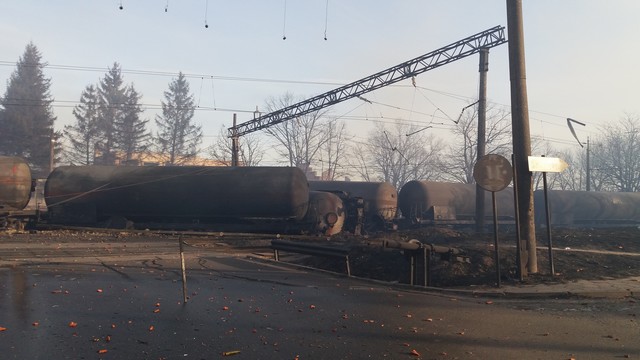 The death toll from Bulgaria’s Hitrino gas tank transporter train explosion stood at five, with 29 injured, the country’s interior and health ministries said in the early afternoon of December 10.

In a 12.30pm update, the Interior Ministry gave the number of dead in the Hitrino explosion as five, while authorities have said that the death toll was expected to rise.

“Basically everything around the perimeter of the blast was destroyed, including the regional police station and the railway station. The destruction is considerable,” national fire chief Nikolai Nikolov said.

Health Minister Petar Moskov told reporters that so far, there were 29 injured people registered at the hospital in Shoumen.

Of these, 16 had been hospitalised in Shoumen, six transported to the Military Medical Academy and St Marina hospitals in Varna, with varying degrees of burns, head and chest traumas.

Of those in hospital in Shoumen, four were in serious condition in intensive care, and three in critical conditions.

A total of 140 units of blood and plasma had been provided from Sofia and Varna, Moskov said.

The blast at the Hitrino railway station occurred at 5.37pm and a report was made to emergency number 112 at 5.42am, Bulgaria’s authorities said.

The Health Ministry said that the first ambulance had been dispatched from the town of Venets at 5.45am, arriving in Hitrino at 5.54am. Two further teams arrived about 30 minutes later.

Hospitals in Shoumen, Turgovishte, Razgrad and Varna readied themselves shortly after 6am to receive large numbers of casualties. The first victim arrived at the hospital in Shoumen at 6.10am.

The Regional Inspectorate of Environment and Water said that its teams at the site of the explosion had established that levels of carbon monoxide and carbon dioxide in the air were “significantly” above the norm, but below the limit of risk to human health.

A mobile air quality measuring station had been deployed and would remain in place for as long as needed.

Nikolov told Bulgarian National Radio that rescue teams were continuing to search for people under the rubble of collapsed buildings in Hitrino.

Nikolov said that he could not say precisely how many houses in the village had been destroyed.

The Interior Ministry said that 40 households had been evacuated.

Close to 200 firefighters, rescue team members and police were at the scene, the Interior Ministry said.

Media reports said that president-elect Roumen Radev had headed to Shoumen hospital to visit the victims and was expected to proceed to Hitrino.

Earlier, Prime Minister Boiko Borissov and the top leadership of the Interior Ministry paid an inspection visit to Hitrino.