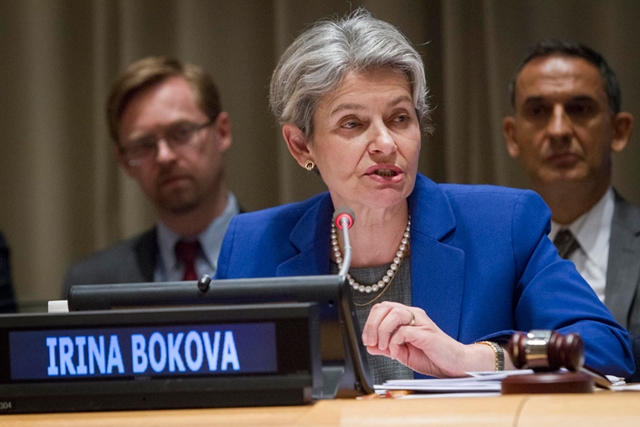 Perish the thought that as an institution, the United Nations has a dire shortage of platitudes, buzzwords and vague good intentions. Should that body elect Irina Bokova as its next Secretary-General, she would arrive with sufficient in stock to build a new tower of them to cast a long shadow over New York’s East River.

One does not necessarily want to be beastly to Bokova. She was only the second in a series of candidates to be Secretary-General to take a seat at the high table of the UN’s Trusteeship Council Chamber in what has been labelled “informal dialogue” (candidate hearings, one might prefer) and who knows what verbal fog might still gather in that august chamber.

Bokova was bookended on day one of these hearings, awfully sorry, informal dialogues, between Montenegro’s candidate Igor Lukšić and António Guterres, the nominee of Portugal. She won, at least, the sartorial stakes. Guterres was grey-suited with a sombre maroon tie. Lukšić favoured navy with a subtly fashionable tie. Bokova garbed herself in a blue trouser suit accessorised with a string of white pearls, not only channelling Thatcher (love or hate her, her tone for politicians lives on) but also discreetly suggesting the colours of the UN itself.

On one level, if this was Washington politics, Bokova would be the Beltway candidate; in her second term as the head of Unesco, a candidate from within the system. The observation about her sartorial choice is made not to be facetious but as an overture to the message that Bokova seemed keen to hammer home, of herself as the candidate of continuity. Whether or not that is an advisable choice may depend on your view of incumbent Secretary-General Ban Ki-moon, Bokova’s current boss, or for that matter, of the state of the UN itself.

Nominated by Bulgaria, and not without considerable domestic divisive controversy on the subject, Bokova offered a postcard of her country, boasting of its more than a millenium of history, its long-standing cultural, historical and geographical charms. Then, and it may be mischievous to suggest that this was done in mind of the controversy that attends her communist-era pedigree, she performed a graceful chronological entrechat to post-communist Bulgaria (thus leaving out some several decades of the 20th century and her own life) to introduce herself as an eager and involved contributor to the country’s 1991 constitution, especially – in her description – in the arenas of human rights and most particularly, women’s rights.

(Bokova’s less-than-subtle references to her own gender, generally acknowledged as a factor in this year’s choice of a new UN chief, would have put in the shade Hillary Clinton, who would have been campaigning not so far away, elsewhere in New York, to be the next US president.)

Referring to those early heady years in modern Bulgaria, Bokova asserted: “I know what a transition is”*. She extended this idea to being of relevance to the UN as a whole.

She added that she was a “convinced multilateralist”, perhaps a nice point to reinforce, though one that, were it lacking in her convictions, would make her choice to seek the job of chief of history’s most famous multilateral body a very odd one indeed.

After that, we meandered in to a question-and-answer session that was reminiscent neither of the cut-and-thrust of a US congressional hearing nor even of a European Parliament hearing of the kind that some years ago prompted the exit of Roumyana Zheleva from public life.

Much of the questioning served as a reminder of two things. First, that even as an association of member states, the latter-day UN is as much a motley cluster of groupings, as questions were put on behalf of – among others – the Non-Aligned Movement, the G77, the Africa Group, the G4, the European Union, African Union, the Alliance of Small Island States, and so on. Second, and one fears for envoys who clearly have spent far too much time in the cloistered walls of the UN, it has its own in-language, making the whole thing reminiscent of being trapped in some kind of hell of NGO-speak. Verbiage as a substitute for action, which may serve either as a criticism of the nature of the UN, or as its corporate mission statement.

Bokova, we learnt, is keen on COP21 and addressing climate change, believes in the role of women in peace and sustainable development, believes that the UN can work better with the African Union, and in reply to a question (from a civil society representative), declared herself to be against corruption and bad management practices at the UN, while keenly in favour of continuing the process of reforms. Toward the end of the hearing, she made reference to the Durban Declaration (to save you looking it up, that emerged at the end of the farcical UN conference in 2001 in South Africa’s otherwise beautiful Indian Ocean city) and let it be known that she was keenly against the resurgences of xenophobia and racism troubling the world of late.

She did not fail to point to her own years of experience as head of Unesco, noting, among other things, that “human rights is the basis of all our activities” as, she said, should be the case for all of the UN. To a question from English school pupils about what she would do – even if she did not get the post of UN Secretary-General – to make the world a better and happier place, Bokova described herself as a “happy person leading a happy organisation” – the latter being, lest critics glance askance, a reference to Unesco.

Inevitably, the Middle East issue came up, including from the representative of the “State of Palestine”. Bokova burbled about how she would “spare no effort” to build trust and mutual confidence, though it remained unclear how; to be fair, her time to explain was limited. She went on, in reference to such conflicts, to concede that she had no “magic bullet”, perhaps not the most fortunate choice of expression in relation to the Middle East.

In one of the few questions of direct substance, free of jargon and mercifully brief, perhaps in part because it came towards the closing minutes of the slightly more than two hours of the hearing (read: informal dialogue, if you must) a representative of Ukraine challenged Bokova directly to say what she would do to stand up for the UN General Assembly resolution on the territorial integrity of Ukraine, most specifically Crimea. Rushing to answer multiple questions at that stage, there seemed no direct answer, perhaps beyond that lack of a magic bullet and a commitment to stand for up for the founding principles of the organisation.

In sum, the hearing (yes, I know) was a largely tepid and pedestrian affair, genteel rather than challenging, and certainly no candidate was harmed in the production. Like other candidates, the fate of Bokova will – for all the claims of a new age of transparency – probably first be decided by the inner workings of the Security Council, before a decision is put to the General Assembly. And, as noted, there are other candidates yet to be heard, and perhaps deals to be made; it is the UN; Bokova made no gaffes, and at the UN, platitudes and vagueness are hardly the kind of thing that are penalised.

[*For my birthday, I want a T-shirt with those words on it.]