The refugee camp at Idomeni near the border between Greece and the Republic of Macedonia was continuing to grow on March 7, with the number of people now exceeding a reported 14 000, even as an emergency summit was being held in Brussels, involving EU and Turkish leaders in seeking a solution to the refugee crisis.

At the summit, a disputed point was a proposal that had been floated in a draft document about closing the Western Balkans migration route.

Reports from Idomeni said that numbers had swelled overnight with the arrival of a new group of refugees. Macedonian authorities were continuing to let through only small numbers of migrants, and tensions at the camp were rising.

Reporters at the scene said that overnight, only about 100 people had been allowed to cross the Greek-Macedonian border.

Informal predictions are that if the “Balkan route” really is shut down, in the next few weeks about 100 000 refugees would be stranded in Greece. Two-thirds of those stranded in the country currently are in the northern part, including in camps such as Idomeni.

In Bulgaria, as the country held a four-day weekend around its national day, police, military and the Bulgarian Red Cross took part in an exercise ordered at short notice by Prime Minister Boiko Borissov.

The object of the exercise was to co-ordinate joint actions by the Interior Ministry, Defence Ministry and Bulgarian Red Cross in the event of a sharp increase in migrant pressure.

Bulgaria’s approach is that in the event of a significant increase in the number of migrants, security forces will direct migrants to official border checkpoints, where they will be fingerprinted, undergo medical checks and allowed to go on to Western Europe only after confirmation of acceptance from a host country is received officially.

More than 400 military personnel took part in the exercise and at least half are to remain in place in the border regions even though the exercise – proclaimed a success by Borissov and other government figures – is over.

Borissov was heading to the Brussels March 7 summit with the view that the procedures carried out in the long weekend exercise are those that should be adopted at the meeting.

On March 7, Deutsche Welle reported that German chancellor Angela Merkel, speaking on arrival at the EU-Turkey summit, said that she did not support a part of the summit’s draft resolution declaring that the Balkan route through Europe “is now closed”.

Merkel said the EU’s response to the issue “can not be about closing things.” Instead, she called for a “sustainable solution together with Turkey,” to ensure that migration flows reduced for “all countries, including Greece”.

A draft statement from the European Council which went public on March 5 had said Brussels planned to close the route in an effort to prevent more migrants from moving north into Europe on land. However, German newspaper Bild reported that Merkel rejected the plan upon her arrival in Brussels, with support from European Commission President Jean-Claude Juncker.

On March 4, ahead of the summit, the UN refugee chief – warning that Europe is running out of time to solve the current refugee situation – outlined a detailed six-point plan.

“This is as much a crisis of European solidarity as it is a refugee crisis,” said the UN High Commissioner for Refugees, Filippo Grandi, in a media statement. “The collective failure to implement the measures agreed by EU member states in the past has led to the current escalation in the crisis,” he said.

The Office of the UN High Commissioner for Refugees (UNHCR) is highlighting that the situation is quickly deteriorating with some 30 000 people now in Greece, almost a third of whom are in Idomeni just near the border with the Republic of Macedonia.

Although the Greek authorities and military have ramped up their response, thousands are sleeping in the open without adequate reception, services, aid or information. With tensions mounting, the situation could escalate quickly into a full-blown crisis, the UN has warned.

Ahead of the meeting, Amnesty International said that European leaders ‘attempts to use Turkey as their border guard to stop refugees and asylum-seekers heading to the EU is a dangerous and deliberate ploy to shirk their responsibilities to people fleeing war and persecution.

EU efforts to address the refugee crisis have focused on ensuring that refugees and asylum-seekers remain in Turkey, instead of sharing the responsibility for their protection and assistance, Amnesty International said.

“Using Turkey as a ‘safe third country’ is absurd. Many refugees still live in terrible conditions, some have been deported back to Syria and security forces have even shot at Syrians trying to cross the border, “said Gauri van Gulik, Amnesty International’s Deputy Director for Europe and Central Asia.

“Europe has an absolute duty to protect refugees and must make the bold decision to fast-track significant, unconditional resettlement as a matter of urgency.”

Despite the positive efforts of Turkey to accommodate Syrian refugees, many live in desperate conditions, and hundreds of thousands of Syrian children receive no formal education. Asylum-seekers from other countries face similar problems and remain in a legal limbo without their claims for refugee status being processed.

The EU is currently offering Turkey three billion euro as part of the EU-Turkey action plan on migration.

“If the EU is going to hand over such enormous, much-needed sums to Turkey, it has to come with absolute guarantees that it will be spent on support for refugees and that the current human rights violations stop outright,” said Gauri van Gulik.

Turkey is already the largest host to refugees in the world, with three million refugees in the country. Tens of thousands more in Syria have reached Turkey’s border and are seeking safety.

According to UNHCR data, 91 per cent of people crossing by sea from Turkey to Greece since January 1 2016 come from Syria, Afghanistan or Iraq and are therefore highly likely to be in need of international protection.

“It is unacceptable to expect that the responsibility for refugees and asylum-seekers should be entirely carried by a country that already hosts three million refugees,” Van Gulik said.

Meanwhile, in Athens on March 6, crowds converged on Syntagma Square, holding plastic bags and boxes, with offers for the refugees and immigrants who have been stranded in Greece, the Independent Balkan News Agency reported. 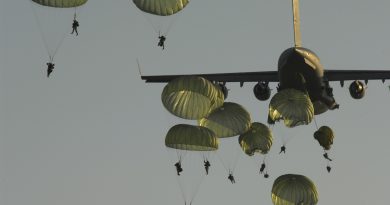 US to send paratroopers to Poland, Baltics