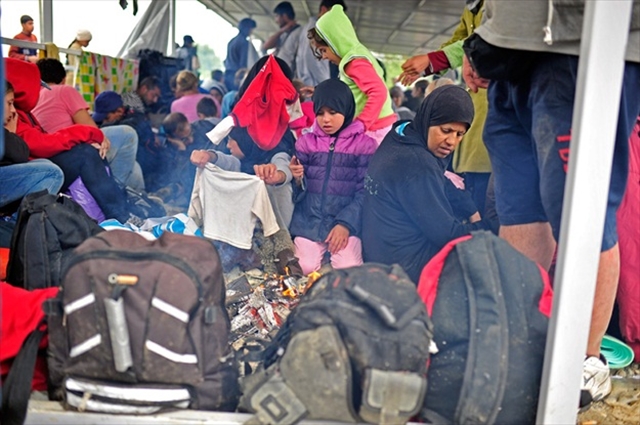 Europe is facing a largely self-induced humanitarian crisis as there is a rapid build-up of people in an already struggling Greece, the UN High Commission for Refugees said on March.

UNHCR spokesperson Adrian Edwards said that the risk of the crisis came as governments were not working together in spite of having already reached agreements in a number of areas, and country after country imposing new border restrictions.

Inconsistent practices are causing unnecessary suffering and risk being at variance with EU and international law standards, Edwards told a news conference.

As of the night of February 29, the number of refugees and migrants in Greece and needing accommodation had soared to 24 000.

About 8500 of these were at Eidomeni, near the border with the Republic of Macedonia. At least 1500 had spent the previous night in the open.

The crowded conditions are leading to shortages of food, shelter, water and sanitation. Tensions have been building, fuelling violence and playing into the hands of people smugglers, the UNHCR said.

The Greek authorities have responded with the military setting up two camps near Eidomeni with a projected capacity of 12 500 and a nearby third site already under construction.

“With our partners UNHCR continues to supplement the Greek response effort. We have provided rub halls, tents and refugee housing units, other core relief, plus additional staff and specialists, including protection and technical staff,” Edwards said.

Overall Mediterranean arrivals have slowed over the winter but remain relatively high. Data as of the morning of March 1 shows that 131 724 people made the journey during January and February 2016, 122 637 of these landing in Greece). This exceeds the total for the first half of 2015. This year so far, 410 people have died.

Solving Europe’s refugees and migrants situation and preventing a new crisis in Greece requires a number of clear actions, the UNHCR said.

Among the most urgent of these when it comes to Greece is the need for better contingency planning, with increased accommodation capacity and other support. The authorities are trying to respond now to prevent a further deterioration of conditions throughout Greece, Edwards said.

“But, more resources and better co-ordination are critical for averting wider suffering and chaos.”

UNHCR was continuing to support the response operation, he said.

It had set up field offices in eight locations, and deployed additional staff including mobile emergency teams who quickly move to wherever the changing situation demands.

“However, with increasing border restrictions across the Balkans, we are concerned that the situation could escalate into a humanitarian crisis similar to that on the Greek islands last autumn.”

UNHCR urged the Greek authorities with the support of the European Asylum Support Office and EU member states to strongly reinforce its capacity to register and process asylum seekers through the national asylum procedure, as well as through the European relocation scheme.

“Greece cannot manage this situation alone. It remains absolutely vital therefore that the relocation efforts that Europe agreed to in 2015 are prioritized and implemented,” Edwards said.

He said that it should concern everyone that despite commitments to relocate 66 400 refugees from Greece, States have so far only pledged 1539 spaces, and only 325 actual relocations had occurred.

Increased regular pathways for admission of refugees from countries neighbouring Syria will also help in the overall management of this situation, the UNHCR said.

Edwards said that UNHCR will convene an important conference on this topic in Geneva on March 30 and hopes for concrete offers in this regard.

“UNHCR is urging Greece and States along the Balkans route to act quickly to avert a disaster and approach this emergency in a spirit of solidarity and sharing of responsibility. Safe access to asylum, shelter and basic assistance, and treating people with dignity and respect must remain essential elements of the response,” he said.

(Archive photo, in Macedonia at the Greek border: UNICEF/Tomislav Georgiev)