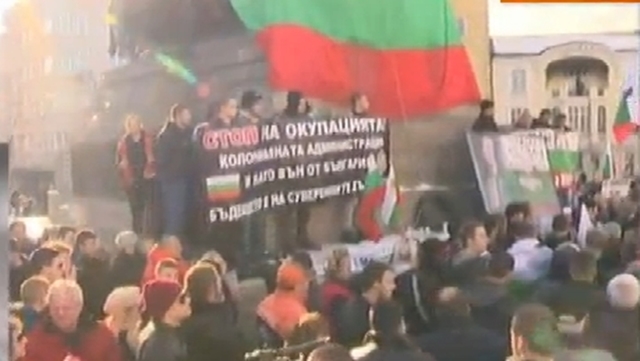 Preceded by warnings by senior Bulgarian officials of an “attempted coup” and allegations that “football fans” for hire would seek violent confrontation, a January 28 2016 protest outside Parliament in Sofia billed as “national strike – we’re here” gathered a mere few hundred people, not even disturbing the afternoon flow of cars past the legislature.

The protest was not the work of the Protest Network, which emerged during the 2013/14 anti-government protests, nor of the Justice for All initiative by civil society that for months has been seeking to pressure politicians to get a move on with genuine judicial reform.

Rather, the January 28 event (or non-event, as its critics might prefer) seemed to have parallels with the February 2013 protests that at that time turned violent, prompting the resignation of Boiko Borissov as prime minister and the months of instability that followed.

Among those who pointed to such parallels were Borissov – now again in office as head of government, his media office, senior figures in the government and the ruling party, and at least one observer.

Ahead of the January 28 gathering, everyone from the head of the government media office to the Interior Minister to senior police officers and at least one governing party MP said that they had information that there would be “provocations” at the event.

Meanwhile, in yet the latest illustration that the “invited”, “interested” and “going” figures on a Facebook page are seldom borne out in reality, the supposed 3000 who said they would attend turned into barely 300.

At least one Bulgarian media outlet consciously echoed the 2013 under-reporting, by media allied to the ruling axis of the time, of the anti-government protests then by using the same terminology, headlining the January 28 turnout as “scant”. The difference was that this time around, the use of the term was accurate.

Before the event, media and social network users skeptically raised questions about who was organising the protest, which seemingly was about everything, but most notably wanting the resignation of the current government, among a raft of other nationalist and “patriotic” stances generally associated with far-right and populist parties.

On the Facebook page of the event, skeptics also asked why the event was set to start at 3pm – a time that most adults would be at work.

Media reports said that the application to hold the protest outside Parliament, from 3pm to 6pm, had been lodged by Boyan Rasate, leader of the minority fringe Bulgarian National Union, an extremist nationalist party with an unblemished record of never winning any seats in elections.

That Rasate had lodged the application was denied in a post on the Facebook page of the event, in which the organisers described themselves as representing more than 20 NGOs, more than 10 parties not represented in Parliament, more than 30 private sector companies and 200 people who had been “working actively” for a fortnight to organise the event.

They did not say who they were, though.

Speaking to Bulgarian National Radio, Elena Vatashka, head of the Association of Bulgarian Football Fans, vehemently rejected allegations by the Prime Minister’s media advisor that “football fans” had been recruited to cause trouble at the event.

Vatashka said that the situation was such that every day there were at least a few very good reasons for calling for a change in the government of Bulgaria, adding, “I do not understand, after on Facebook daily there are posts about hundreds of events, why about today such crisis PR was activated by the Cabinet and the Ministry of Interior”.

On the morning ahead of the January 28 gathering, GERB MP Dessislava Atanassova told reporters that there “official information” – not just allegations – that provocateurs and hired football fans were to incite trouble at the event.

She said that she suspected that certain groups of people or certain economic circles with economic of other interests were needlessly inciting tension against the background of all the scandals in the judicial system and in connection with the European Commission’s Cooperation and Verification Mechanism report that came out on January 27.

Asked to comment on allegations that Bulgarian businessmen Tsvetan Vassilev and Grisha Ganchev had paid the football fans to join the protest and incite disorder, Atanassova said, as quoted by local news agency Focus: “I am not an investigating authority and I can not undertake the engagement to present any theories. All I can say is that the names in question were also mentioned in the affair around Corporate Commercial Bank. Over the past year the National Revenue Agency and the National Customs Agency collected more than 2.8 billion leva more. I guess this affected some people’s smuggling business.”

At a cabinet meeting on January 27, Borissov said that the mafia had an interest in bringing down the government, that there would be no parliament and no laws passed, “because then the smugglers and the oligarchs will continue to take the billions that they are accustomed to receiving”. He pointed to increased VAT and other revenue collection in the past year.

Whatever the strident pre-event reaction on the part of the government, Iliyan Vassilev, formerly Bulgaria’s ambassador in Moscow, it was “not so difficult” to discern that behind those organising the protest were – in the terminology of latter-day Bulgarian political-speak – “Who?” and Russia itself.

The question “Who?” was popularised at the time of the June 2014 protests against the then-administration that were prompted by the appointment of controversial business person Delyan Peevski as head of the State Agency for National Security. Initially formulated as the question about who was behind Peevski’s nomination, it has become a byword for undue covert influence in Bulgarian public life.

In a commentary article on the Mediapool website, Vassilev said that there was no way to organise a “national” protest without strong financing. He added that bogus stories on various issues in the media in recent weeks had been paving the way for the January 28 protest. These “info bombs” were intended to instill a sense of uncertainty.

And while for many the toppling of Borissov would be welcome, “this is not about an individual but a major operation to change our orientation or at least destabilise us to the point we have no control”.

“This is the Bulgarian version of what was organised in Montenegro and Moldova,” Vassilev said, pointing to recent large-scale protests that stirred up political instability in those countries.

He said that the January 28 protest was not a complete copy-paste of the events of February 2013, but there was more than one similarity, such as distracting from the EC report to shift the public agenda and debate.

“Since ‘Who?’ cannot relinquish control over the judiciary and key sections of the Bulgarian economy, the security services – it responds from the street,” Vassilev said. With “Who?”, Moscow was strong enough to cause an earthquake in an effort to cause a blockage of reforms and the derailment of Bulgaria’s Euro-Atlantic path.

Vassilev added that it was not sure how many people would be on the street on January 28 “or that this is the main protest that ‘Who?’ will organise”.

As the late afternoon came, there were no squibs outside Parliament, bar a rather small damp one, while some reporters at the scene said that the police presence outnumbered that of the protesters.

The vast majority of MPs had gone home, and ahead of the gathering dusk, Bulgaria’s media got a lot more interested in the government announcement that Prime Minister Borissov had asked Education Minister Todor Tanev to resign over a complicated scandal involving the school syllabus.

At the protest, one participant held aloft a sign reading “this parliament does not represent Bulgarians”. It is an open question who the few hundred outside it represented.