The U.N. warns that refugee women and children seeking safety in Europe are at great risk of sexual abuse and violence throughout their journey.  An assessment mission conducted by the U.N. refugee agency, U.N. Population Fund, and the Women’s Refugee Commission finds measures to protect the women and girls are inadequate.

The joint field mission was carried out in Greece and Macedonia in November.  It found those most at risk of sexual abuse and violence include single women traveling alone or with children, pregnant and lactating women, adolescent girls, unaccompanied children and early married children.

UNHCR spokesman William Spindler tells VOA it is difficult to know how widespread the phenomenon is because women are reluctant to speak about their experiences; but, he says it is feared the abuse to which they are subjected along the European migratory route is vastly under-reported.

He says women describe being forced to engage in transactional sex to pay for travel documents on their journey.  He says women fall prey to smugglers who demand a hefty price for transporting refugees and migrants across the Mediterranean Sea to Europe.

“In some cases, women have been put under pressure to perform sex with the smugglers in order to be allowed to continue,” Spindler said. “There have also been cases in which women, girls and boys have lost their money…therefore, the only way that they can continue with their journey, find the money to continue with the journey is through selling themselves for money.”

Spindler says there also are reports of women being sexually abused by other refugees and migrants, and in some cases by officials in countries of transit.  He says small boys traveling alone also have been forced to perform sex by smugglers so they can continue their journeys.

He says women and children are exposed to many dangers in overcrowded reception facilities or transit centers.  He says simple measures, such as providing separate toilets for men and women, and ensuring well lit and gender separated sleeping facilities, could reduce the potential risks.

Aid agencies are calling for action by European Union governments to protect refugee women and children from the dangers and exploitation facing them and to prosecute the perpetrators of these crimes. 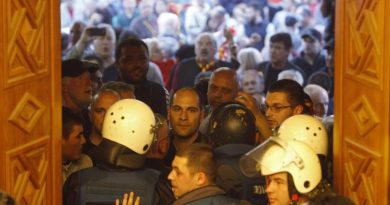