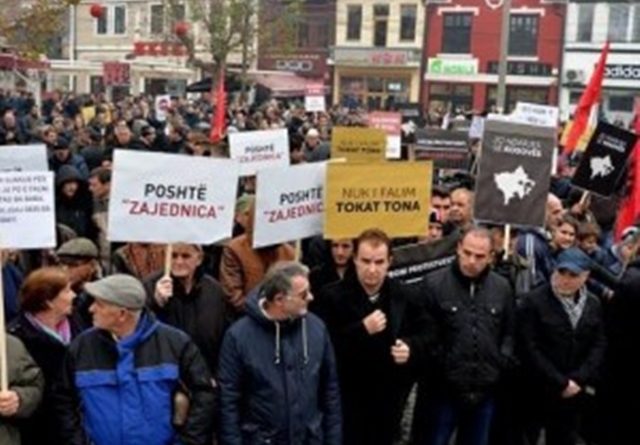 Kosovo’s worst political crisis since declaring independence from Serbia in 2008 deepened Saturday, with thousands of opposition protesters taking to the streets of the capital, Pristina, to denounce the country’s elected officials and set fire to the government’s headquarters.

The crowd, which repeatedly chanted, “Down with the government,” was angered by a European Union-brokered deal with Serbia that allows Serbian-majority municipalities within the predominantly ethnic Albanian state to establish an association and have more autonomy.

They also object to a separate border demarcation deal with Montenegro that cedes a small portion of Kosovo to its Balkan neighbor.

“They are taking away our country,” said Genc, 21, a student who attended Saturday’s demonstration. “The people here are fed up.”

Speaking on stage in a main square adjacent to the parliament building, opposition leaders denounced the Serbia and Montenegro agreements as unconstitutional violations of Kosovo’s sovereignty and demanded fresh elections.

Before the speeches concluded, some demonstrators began throwing rocks, glass objects and Molotov cocktails at police stationed outside government offices. The clashes intensified as soon as the speeches finished, leading to the main government building catching fire.

“We waited and waited, but when they set fire to the building we had to act,” Major Baki Kelani of the Kosovo police told VOA.

Police used tear gas to disperse the crowd, estimated to be at 8,000; however, many hard-liners ran down side streets and continued to hurl rocks and Molotov cocktails at officers, who proceeded slowly down a main boulevard.

A 26-year-old woman, who wished to be identified only by her initials, E.K., was in a group throwing rocks at police when officers started to pursue them. She and two female friends were eventually forced to hide behind garbage bins in a cul-de-sac.

“I’m not really scared,” she said. “Kosovo is a big mess right now, and we want to make a change.”

E.K. said her grievances had less to do with territorial loss and more to do with the everyday lives of Kosovars. “There’s corruption, the economy [is bad], unemployment — there are many reasons to protest.”

By late afternoon, police had arrested 24 people. Fourteen people were injured, among them 10 police officers, two protesters and two journalists.

Saturday’s unrest was the latest in a string of altercations in Kosovo, which has seen a surge of nationalist sentiment in recent months. Since October, opposition members of parliament have attacked the chamber with tear gas nearly half a dozen times, resulting in the arrests of 13 lawmakers.

Speaking in Kosovo last month during his first trip to the Balkans as U.S. secretary of state, John Kerry condemned the opposition’s tactics, saying parliament should be treated as “a shrine to democracy, a place of reverence, of respect. That is not the place for tear gas and is not the place for intimidation.”

Analysts said Kerry’s visit highlighted growing concerns by the West about the slow pace of progress in Kosovo 16 years after a U.S.-led NATO air war helped pave the way to independence from Serbia. Saturday’s events, they said, will do little to ease those concerns.

“This is not the way that one would have hoped to see Kosovo’s development,” said James Ker-Lindsay, a senior research fellow at the London School of Economics. “I think that there will be a lot of people in the United States and the European Union who are desperately nervous at the moment about the way things are going because, of course, there is that danger that nationalist sentiment, which is currently directed at the government, could overspill … and be directed at minorities.”

Regional leaders are also concerned.  Speaking to the Vienna-based Die Presse newspaper in August, Serbian Prime Minister Aleksandar Vucic said he was “very afraid” of regional instability. “A single spark can set fire to the entire Balkans,” he said.

Ker-Lindsay said that for a relatively small region, the Balkans have a number of potential flashpoints. “What we’re seeing in Kosovo is one of them. I think there has been a tendency for us to take our eye off the ball, so to speak, on the western Balkans. It hasn’t got as much attention as other regions in the news for quite some time, and I think there are people who want to highlight that there are very serious problems that still exist.” 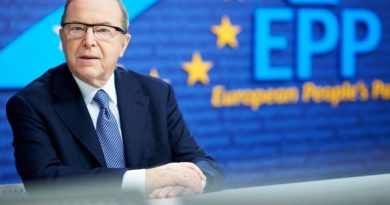