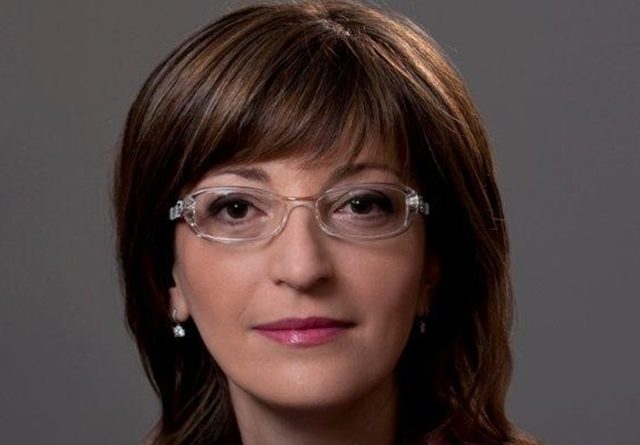 Prime Minister Boiko Borissov’s nominee to replace Hristo Ivanov as Bulgaria’s Minister of Justice, Ekaterina Zaharieva, was voted into office by the National Assembly on December 18 2015.

In Bulgaria’s 240-member National Assembly, the vote – of 126 for, 66 against and with 17 abstentions – betrayed the by-now well-known divisions in the parties of the ruling coalition over the aftermath of the Ivanov resignation.

Those voting against included one MP from the Reformist Bloc, a minority partner in the governing coalition, while seven Reformist Bloc abstained. Seven MPs from the nationalist Patriotic Front, which is part of a deal to support the government in Parliament while not having any Cabinet seats, also abstained.

The other votes against came from opposition parties the Bulgarian Socialist Party, Movement for Rights and Freedoms, Ataka and two independents. Other abstentions included four MPs from minority party Bulgarian Democratic Centre.

Zaharieva told the National Assembly that she took on the post aware that the responsibility was enormous.

She said that the post of Justice Minister was laden with huge expectations, “unfortunately, few of them are connected with the real powers, the powers which are conferred by law.”

Zaharieva said that she would make no empty promises, adding that the quality and performance of a minister was evidenced by the work and results achieved.

She said, against a background of efforts for 25 years at making reforms, starting and updating strategies and increasingly low confidence in the judiciary, people were impatient but results could not be expected to be seen immediately and she could not promise this. It was important now not to lose time and to achieve what had not yet been achieved, Zaharieva said.

Radan Kanev, who after the Ivanov resignation led his Democrats for a Strong Bulgaria party – part of the Reformist Bloc – into opposition, saw the appointment of a two-time former caretaker deputy prime minister, just a year after the government came into office, as a sign that early elections were coming.

The general feeling of instability was fuelled by the fact that parliamentary approval of Zaharieva’s appointment would succeed with the help of three parliamentary groups that were split on the matter, he said.

Tsvetan Tsvetanov, head of the parliamentary group of Borissov’s GERB party, defended the appointment of Zaharieva, saying that she had the capacity to do the job.

Zaharieva, who has a master’s degree in law from Plovdiv University Paissi Hilendarski, was up till now the chief of staff of head of state President Rossen Plevneliev, and was twice deputy prime minister and simultaneously holder of other portfolios in Bulgaria’s caretaker cabinets in 2013 and 2014.