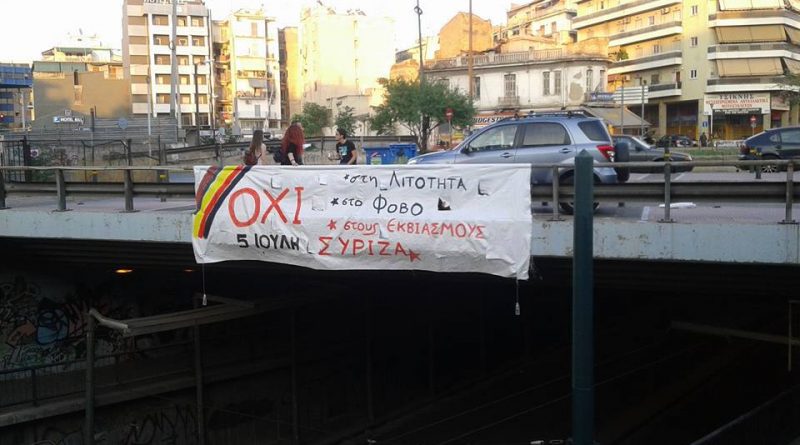 Greek voters are overwhelmingly rejecting a demand by the country’s lenders to impose more austerity measures on them in exchange for new bailout loans for the government in Athens.

With half of the vote counted from a Sunday referendum, more than 61 percent are rebuffing warnings from European leaders that ignoring their calls for more austerity could force the country from the 19-nation euro currency bloc.

A government spokesman said the vote count shows that Prime Minister Alexis Tsipras “has a clear mandate from the Greek people” to negotiate easier bailout terms with the country’s trio of lenders, its European neighbors, the European Central Bank and the International Monetary Fund.

Whether the creditors will be willing to pull back on their austerity demands and approve more bailout money for Greece is far from certain.  As Athens defaulted on a $1.8 billion loan payment due the IMF last week, European leaders said a negative vote would signal that Greece wants to leave the eurozone and divorce itself politically from Europe.

Eurozone leaders said they will discuss the Greek outcome Monday, with German Chancellor Angela Merkel and French President Francois Hollande meeting in Paris to “evaluate the consequences” of the referendum.

Thousands of Greeks gathered in Athens’ main square Sunday night to cheer the apparent outcome of the referendum, with many chanting “No, no!”

Prime Minister Alexis Tsipras had urged voters to reject the conditions, which include more tax hikes and spending cuts. He said a “no” vote would give Greeks a better negotiating position with European Union finance ministers.

To loud cheers from supporters, Tsipras arrived to cast his vote in a suburb of Athens. On the day of reckoning for Greece, he struck an optimistic tone.

“Today democracy overcomes fear and blackmail,” he said.  “The determination of our people beats the propaganda of fear. I’m sure that from tomorrow, we’ll open the road of a return to the fundamental values of Europe.”

Greek voters had to decide between the Prime Minister’s assurances that this is just part of the poker game with Europe and warnings from Brussels that a “no” vote could see Greece ejected from the euro.

Nearly 10 million people were registered to vote in the referendum and voting was reported to be brisk at many polling stations.

Greek Finance Minister Yanis Varoufakis, who says he would resign from the government Monday if his countrymen voted in favor of accepting the austerity demands, called the vote “a holy moment.”

“The massive failures of the eurogroup were leading to ultimatums for which the Greek people had no say,” Varoufakis said after voting.  “Today, after five years of failure, the Greek people have the opportunity to decide on the last ultimatum of the eurogroup, the institutions and our partners.  This is about a holy moment.  A moment of hope for the whole of Europe – a moment that gives hope to Europe that the common currency and democracy can co-exist, and they co-exist.”

A woman voter said she was undecided until the last minute. She has two small children and is anxious for the future. “Though I am determined to make even more sacrifices for Greece to get over the crisis and have a better quality of life,” she says.

But the “No” campaign says Brussels’ warnings of a Greek exit are just a bluff.

Iasonas Liberis, an observer for the “No” campaign, said there are rules in the EU, and the EU is not the property of the technocrats. The democratic will of the people of Europe must be accepted.