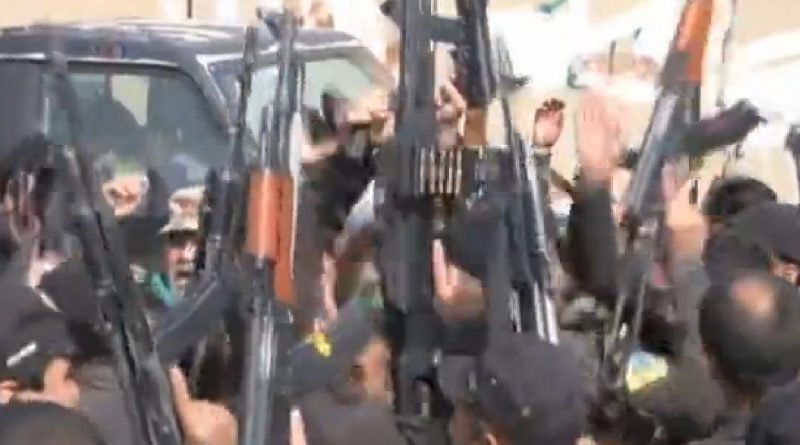 The White House says violent extremism and Russian aggression in Ukraine are two of the greatest challenges to U.S. national security. And one place those threats converge is the Balkan region, where political instability, outstanding ethnic tensions and economic fragility make the countries of the area particularly vulnerable.

Large Muslim populations and historical and religious ties with Russia make the Western Balkan countries susceptible to these outside forces. Frank Wisner, a former U.S. ambassador and a former special envoy for Kosovo’s final status talks with Serbia, says that even though the Balkans is not a primary sphere of contest, it is affected.

“I think it’s enormously important the Balkans be shielded from the rivalries of the major powers and second, that the issues in the Middle East not infect the Balkans,” he told VOA in an interview. “With regard to the latter, that’s the job of the intelligence services of Western Europe and the United States and those in the Balkans, to make certain that we track very carefully subversive elements flowing to and from the travel areas of the Levant and the Middle East.”

Countries such as Albania, Bosnia and Kosovo have approved legislation to prevent their citizens from becoming foreign fighters in conflicts elswhere and have made arrests among radical factions. But Ian Brzezinski, former U.S. deputy assistant secretary of defense and a senior fellow with the Atlantic Council, says long-terms security measures require more than mere legislations.

“It’s going to be [a] continuous, long-term undertaking, where deepening that kind of interpolice, international intelligence cooperation, it’s going to only probably become more and more pressing, more and more demanding as time goes on,” he said.

Since the conflict in Syria began in 2011, more than 20,000 foreign fighters — at least 3,400 of whom are Westerners — have gone to Syria from more than 90 countries, according to the Worldwide Threat Assessment of the U.S. Intelligence Community. Official figures from the Balkans and other sources say the number from these countries alone is at least 1,000.

And compared to Western Europe, the Balkans have added vulnerabilities, says Brzezinski.

“The structures of governance and law enforcement are probably a bit weaker in the Balkan countries compared to their northern counterparts,” he said. “Some of them have fairly significant Muslim populations. Not to say that having a Muslim population is a bad thing, but it’s a reality that is being exploited by organizations like ISIS. These are countries that are in the poorer spectrum of the European economic landscape and whenever you have a situation of economic inequity, you have societies that will be more vulnerable to extremism.”

Former Ambassador Wisner says the United States has aimed to act as a stabilizing force and to help these countries agree to outcomes that are mutually acceptable.

But, he says, “there remains an unresolved political agenda in Bosnia, in Macedonia and, of course, between Kosovo and Serbia.”

Russia trying to extend its influence

Another risk factor in this region is the influence that Russia is trying to exert. Recently Secretary of State John Kerry was asked about this issue at a hearing before a U.S. Senate subcommittee.

“Whether it’s Serbia, Kosovo, Montenegro, Macedonia, other places — they are all in the firing line,” he said.

Russia has tried to use its traditional ties with Serbia to maintain its clout and has actively sought to extend its presence in the Balkans.

Serbia depends on Russia for its gas supplies, for example, with imports of 82 percent of the overall gas consumption. After being thwarted by the European Union in its efforts to build a gas pipeline to Southeast Europe, the Kremlin is working for an alternative route passing through Turkey, Greece, Macedonia and Serbia, then into Hungary and perhaps on to Austria. And broadcasters Russia Today and Sputnik have presences in Serbia.

Brzezinski points out that Russia benefits from the time when the Soviet Union existed and created infrastructural dependencies within the region upon what is now the Russian economy.

But as the Balkan economies modernize and adopt European standards of law and commerce, he adds, they are weaning themselves from that dependency.

Even so, Serbia, for example, has not endorsed EU sanctions against Russia. And when Russian President Vladimir Putin visited Belgrade last October, it was a reminder that Serbia’s close ties with Russia sit awkwardly with its EU ambitions.

Ambassador Wisner says it is important there be no crises for Russia to exploit that would further increase tensions between Russia, Europe and the United States, and that Europe must continue to press ahead with its inclusion of Serbia and Kosovo in the EU and attempt help Greece and Macedonia resolves longstanding issues.

“By settling these questions, there is no negative ground on which Russia can play and it’s easier to maintain the harmony that we all need in the Balkans for its own purposes,” he said, referring to concerns that Putin is attempting to drive a wedge between the Balkans and the West.

An analysis late last year in the German magazine Der Spiegel details Russian efforts to influence developments in Serbia and Bosnia-Herzegovina, and to present itself as an alternative to Euro-Atlantic integration.

Secretary Kerry echoed that concern during the Senate subcommittee hearing in which he described Russia as engaged in a “massive effort to sway nations, to appeal to them, reach out to them.” Efforts that could result, he said, in a new kind of dangerous East-West zero sum game.

What the Kremlin exploits in the Balkans, analysts say, is pervasive corruption, weak institutions and lacking economic opportunity. The antidote, says Brzezinski, would be greater assistance to the region by the West, and acceleration of integration into the EU.

“I think that the United States can more forcefully lean forward in terms of reanimating the vision of a Europe whole and free, pressing forward more assertively for NATO enlargement, particularly to Macedonia and to Montenegro,” he said. “I think we ought to be working to the degree that we can to give Serbia greater confidence in the potentials of security cooperation with the West, to wean it away from its kind of pro-Russia outlook. I think continued and enhanced security cooperation between the countries of the Balkans and Western Europe — particularly Interpol and EU — is in order.”

But both Wisner and Brzezinski agree that integration is a two-way street and that the countries themselves will need to drive the process through aggressive reforms and achievement of the standards needed to become full members of the Euro-Atlantic community.