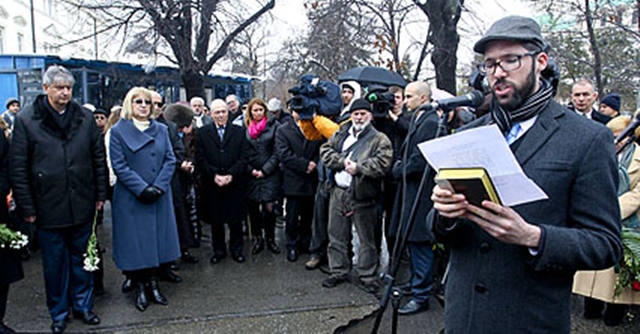 Bulgaria marked on March 10 2015 the 72nd anniversary of the prevention of the deportation of Bulgarian Jews to Holocaust death camps, while honouring the memory of Jews from northern Greece and the former Yugoslavia who died at Nazi hands.

Speaking at a ceremony at a memorial plaque outside Parliament, Israeli ambassador Shaul Kamisa-Raz said that the rescue of the Bulgarian Jews was an expression of solidarity, tolerance and friendship between the two peoples.

In 1943, resistance by the Bulgarian Orthodox Church, civil society and a number of politicians to the deportation of Bulgarian Jews led to the cancellation of planned deportations. This meant that about 50 000 Bulgarian Jews did not share the fate of the six million who died in the Holocaust.

“We are here for an event that left a lasting mark in the history not only of the Jewish people, but of the whole world,” the Israeli ambassador said, adding that those who had died in the Holocaust also were being remembered.

Prayers and a minute of silence honoured the memory of the victims of the Holocaust and all genocides in the world.

Wreaths and flowers were placed at the memorial plaque. Participants included pupils from the Dimcho Debelyanov School in Sofia, popularly known as the “Jewish School”.

Earlier on March 10, a service was held at St Sofia church in the Bulgarian capital in honour of those who prevented the deportation of the Bulgarian Jews and in memory of those deported from northern Greece and Yugoslavia. Those areas handed been placed under Bulgarian administration at the time by the country’s World War 2 German ally, but the deportations went ahead, a fact for which Bulgaria has declared a formal apology in recent years.

The Speaker of the National Assembly, Tsetska Tsacheva, said that Bulgaria was the only country in the world where the number of Jews was larger at the end of World War 2 than when the war began.

The rescue of Bulgarian Jews in World War 2 was an inspiring example of behaviour, she said.

In one of the darkest moments of human history, the Bulgarian people had not complied with Nazi orders for the killing of all Bulgarian Jews, a history that must be remembered, Tsacheva said.

Separately, Prime Minister Boiko Borissov, speaking during a meeting on March 10 with American Jewish Committee executive director David Harris, said that the rescue of Bulgarian Jews was an unprecedented fact in the history of the world.

“Not one Jew from Bulgaria was sent to the death camps. We are proud of this fact,” Borissov said.

Borissov said that to this day, “Bulgaria continues to fight against all manifestations of intolerance, xenophobia and hate speech, including in conditions of intense migration pressure on our country”.

Borissov cited as examples the ban on the so-called “Lukov March” in Sofia and the fact that he had taken part in the solidarity march in Paris following the Charlie Hebdo massacre.
(Photo: parliament.bg)