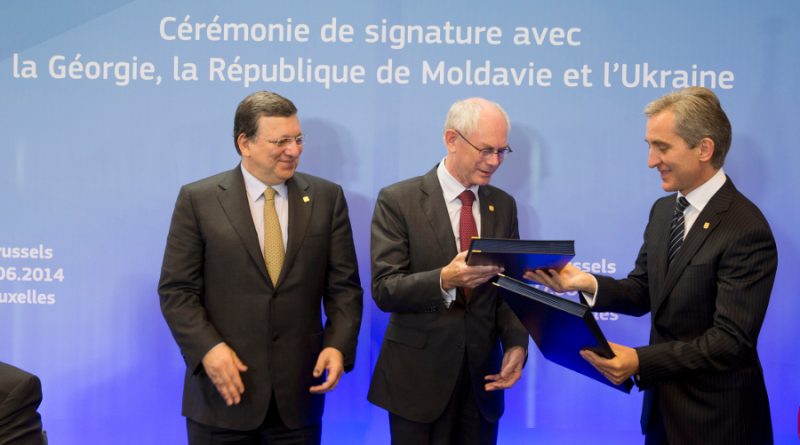 Former Soviet republic Moldova’s government is happily embracing a new pact with the European Union. But the celebration is overshadowed by the prospect of Russian retaliation for the move, especially in light of the dangerous lesson of Ukraine.

Moldova’s ambassador to the United States told Voice of America that he expects an Association Agreement with the European Union to be ratified by his parliament almost “immediately.” Diplomatic receptions are planned, even in Washington, to mark the occasion.

But even as diplomats break out the champagne or perhaps increasingly popular Moldovan wine, there are Russian storm clouds on the horizon. Looming over tiny Moldova is the specter of Vladimir Putin’s regime, which threatened Moldova not to sign the agreement. Moldova is clearly vulnerable and not just with military action or incitement by comparative giant Russia, which already has troops in the breakaway Moldovan region of Transdniestria.

“We are very much aware and worried about the possible reaction,” Moldova’s ambassador to the United States Igor Munteanu said in a lengthy interview on the eve of last Friday’s EU pact signing with Moldova, Ukraine and Georgia. “We are not alone in keeping worried about the future. Of course, the entire region is largely affected by the recent decision of the Russian federation to occupy and annex Crimea and make turmoil in eastern Ukraine.”

“I do hope nothing similar will happen, but we are worried,” added the Moldovan ambassador.

The fear is that Putin could decide to make Moldova the next Ukraine.  Such a dangerous prospect even registered a continent away in the US Congress. With Ambassador Munteanu and his small staff intensely monitoring Capitol Hill, the House Committee on Foreign Affairs Thursday passed a resolution in favor of the EU association pact.

A draft of the House resolution “calls upon the Government of Russia to refrain from economic threats and pressure against Moldova and to cease any and all actions that support separatist movements on the territory of Moldova.”

The US lawmakers said in the resolution Russia should remove troops from the Transdniestria region, noting that action was called for in an OSCE European summit 15 years ago.

The draft House resolution “reaffirms that it is the policy of the United States to support the sovereignty, independence, and territorial integrity of the Republic of Moldova and the inviolability of its borders.”

A companion resolution is being readied in the Senate and a US Congressional delegation is expected to visit Moldova shortly, according to Munteanu. The United States and Moldova established an official “strategic dialogue” this spring, a move toward boosting the visibility of the threatened nation. Munteanu is in regular touch with the US State Department, which publicly offered congratulations on the EU agreement.

The Moldovan ambassador made it clear the trade and economic agreement was also a decision to ally with the Western-oriented European Union.  “It is a strategical choice,” he said, “despite the visible obstacles on this road.”

One threatening obstacle is the supply or pricing of natural gas, a weapon employed by the Putin administration via Russia’s huge Gazprom utility in Ukraine. That tactic can be particularly effective against Moldova. “This is a huge vulnerability to the Moldovan economy,” acknowledged Munteanu.

Gazprom not only supplies the gas, it owns more than half of the MoldovaGaz company, he said. Moldova is working on alternative supply of natural gas through Romania this summer. European Commission President Jose Manuel Barroso saluted the Association Agreement with Moldova, Ukraine and Georgia as “historic” and “the most ambitious the European Union has entered into so far.”

But he also pointedly visited Moldova a few weeks before the signing and asked Russia “not to take punitive measures further to the upcoming signature and implementation of the agreement with Moldova. There is no economic reason, nor legal justification for such behavior,” Barroso said.

Moldova’s clear goal is “to be inside the club” of EU membership, ambassador Munteanu explained. The economic pact “is kind of an insurance policy for us” against Russian attempts to damage the Moldovan economy.

Yet Munteanu was also careful to state the goal of the pact was not aimed at opposition to Russia. Eighty percent of the 846-page agreement is related to trade, according to the ambassador. He termed concerns about the agreement “absolutely stupid.”

“It is our clear understanding that a trade agreement with the European Union should not harm our relations with the Russian Federation, but of course we cannot change the minds of politicians,” Munteanu said.

A negative Russian reaction came quickly. Putin’s spokesman warned right after Friday’s signing that Russia may take action to protect its economic interests in light of the pact.

Russian deputy prime minister Dmitry Rogozin has also offered not very veiled threats against Moldova, including one about hoping Moldovans wouldn’t freeze, a reference to the Russian natural gas spigot. And in a visit last year, he also cautioned Moldova against a rapid move toward the EU. “Traveling at such a speed, a locomotive can lose its rear carriages,” Rogozin warned Moldovans.

The Moldovan ambassador pointed out that he doesn’t expect Russian troops marching into other areas of Moldova in immediate retaliation.

“We do not expect a radical sharp escalation in the following weeks,” Munteanu said. “We are concerned but we are not panicked.”

The nation with a small population of under four million and only independent from Moscow since 1991, is “trying to project every other kind of scenario that could happen,” the ambassador said. “Frankly speaking what is happening in Ukraine is a call to arms to everyone in Europe.”