Bulgarian President Rossen Plevneliev will prorogue the 42nd National Assembly on August 6, paving the way for early parliamentary elections to be held on October 5, the country’s main political parties agreed on June 29.

Plevneliev asked the leaders of all parties represented in the national Parliament and the European Parliament to participate in consultations to discuss the “urgent tasks for parliament, the cabinet and the caretaker cabinet”, but the statement released after four and a half hours of talks made no mention of the National Assembly’s legislative agenda or the government’s goals.

Instead, the talks focused on the stability of the country’s banking sector and its currency board agreement, which pegs the national currency, the lev, to the euro. Bulgarian central bank governor Ivan Iskrov, Prime Minister Plamen Oresharski and Finance Minister Petar Chobanov attended the meeting, which was initially envisioned as gathering of party leaders only.

“The political parties and institutions participating in today’s consultations declare their determination and readiness to ensure the required resources and carrying out all the necessary measures to guarantee the banking stability in the country,” the presidency’s statement said.

In recent days, the central bank and the government have sought to re-assure the public that there is no threat to the country’s banks and assuage fears caused by a bank run on the First Investment Bank.

“We have sufficient reserves, funds and mechanisms to manage any attempts of destabilisation and we stand behind every bank that is subject to attack. The political parties represented in the Bulgarian and European Parliament put the national interest and financial stability, as part of national security, above their political disagreements and unite their efforts to reach stability and trust in the state institutions and the economy,” the statement said.

Regarding the original agenda of the meeting, the presidency said that the snap polls will be held on October 5, as agreed by leaders of political parties during talks on June 27. By law, the President sets the date of the elections within 60 days of proroguing the National Assembly, thus arriving to the August 6 date.

After Parliament is prorogued, Plevneliev will appoint a caretaker government that will prepare the snap elections. In recent days, some voices called for the Oresharski administration to remain in place, possibly after a reshuffle, but the presidency’s statement appeared to rule out this prospect.

On the resignation of the Oresharski government, the statement gave no date, but said that it would happen at a point that would give the presidency enough time to hold talks with political parties and appoint the caretaker cabinet.

(Reports in Bulgarian media said that the socialists were doggedly opposed to naming a date in the declaration, but the resignation is likely to happen no later than July 25.)

Procedurally, once the government has its resignation accepted by Parliament, the parties in the National Assembly will have three attempts to form a government. The parties in Parliament, however, declared in the statement on June 29 that there can be no stable government formed during the term of the current legislature, which would speed up the process.

The talks were attended by the three largest parties in the 42nd National Assembly – the socialists and the ethnic Turk MRF, which form the ruling axis, and opposition party GERB of former prime minister Boiko Borissov. The Bulgaria Without Censorship party and Reformist Bloc, which both won seats in the European Parliament elections last month, were also part of the talks.

Ultra-nationalist party Ataka – which has supported the Oresharski cabinet and the ruling axis during key votes in Parliament, but denies the charges of acting in concert with the governing coalition – has said that it would not participate in the consultations, accusing the other participants of striking shady deals behind closed doors. The party fell short of the threshold to win any MEP seats and opinion polls say it is unlikely it would return in the next legislature. 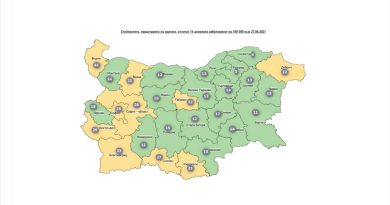