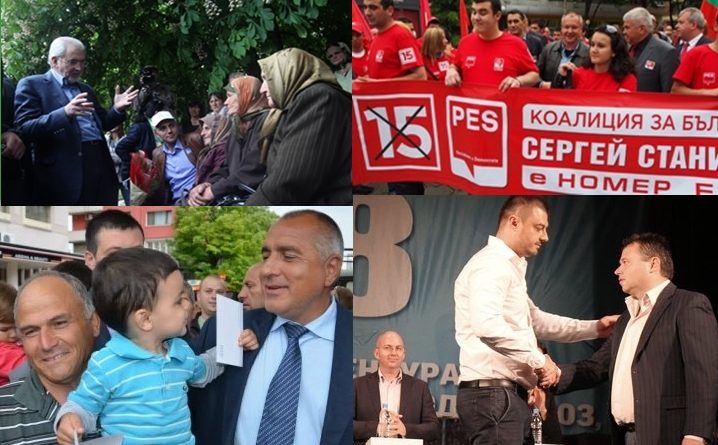 For someone who will place neither first nor second in Bulgaria’s European Parliament elections, and whom some would like to suggest may not win any seats at all, former talk show host Nikolai Barekov has managed to make himself the talking point of the elections.

Of course, the amount of money and resources going into the campaign of the Bulgaria Without Censorship (BWC) party formed around him helps – of which, more later.

Barekov was at the centre of the peculiar odyssey of one Daniel Georgiev, an MP who hardly been a headline-maker before his weathercock behaviour of the past day.

When Georgiev apparently returned to the GERB fold – first having submitted a letter to Parliament saying he was leaving GERB, then sending a second letter revoking the first – Barekov told his reporter former colleagues that Georgiev had been beaten up to make him see the wisdom of remaining in Boiko Borissov’s party.

Georgiev, at some point in his meanderings between the two parties, did describe his actions in the two successive and contradictory letters was “untraditional” and few would be hard-pressed to disagree.

The second letter, he said, “corresponds to my personal convictions,” Georgiev told a news conference called by GERB in the corridors of Parliament, before turning up a few hours later at a BWC rally in Bourgas. On television, there was a brief glimpse of a security guard barring Georgiev from getting on the stage occupied by Barekov, presumably not knowing who the MP was. But then, very few did, before Georgiev became the subject of reporters’ fascination as to what he would do next.

Georgiev rejected allegations that he had been the subject of pressure or a bidding war. “I’m not for sale,” he said.

Having hugged Barekov on stage, Georgiev told reporters he was staying with GERB.

“I would like to thank Mr Barekov for the good things about me I heard in the media. I am convinced he has plenty of really qualified and successful people in his party, “Georgiev also said.
“I remain (a part) of Boiko Borissov’s party. I remain in the party because of all my colleagues in the parliamentary group whom I have really good relations with at the Parliament and outside it. I consider them my associates, especially when we face challenges, “the MP said.

Barekov, in the course of the day, described what was happening at Parliament a farce. This may prove to be his only statement in this election campaign about which consensus is possible.

The anti-government Protest Network, which is not a contestant in Bulgaria’s European Parliament elections, augmented the allegations that it had sent to the Prosecutor’s office in February by alleging the Barekov was funding his BWC party illegally.

* The Protest Network, formed around the campaign that began in June 2013 for the resignation of the government set up with the mandate of the Bulgarian Socialist Party, said that it expected that once prosecutors had familiarised themselves with the material, they would order the shutting down of an association officially created for “non-party activity” but which, the network alleged, was being used to illegally finance BWC to the tune of half a million leva.

The Protest Network, citing a statement by Barekov that he had donated 480 000 leva of his own money to the BWC civil association (as opposed to the political party of that name), noted that the law prohibited an individual to donate to a party more than 10 000 leva a year, so Barekov had donated to the association.

According to the Protest Network, “It is clear that the Bulgaria Without Censorship civil association does not act as a charitable organisation, but only as a means of circumventing the law on political parties to illegally fund Barekov’s party”.

The network quoted statements attributed to Barekov in which he spoke about the association carrying out political activities, which according to the Protest Network was a violation of the law on political parties, which says that only political parties can participate in elections.

* Barekov said that the Protest Network, which he described as “the public relations agency of (President Rossen) Plevneliev” had arrived at the “fascist-Stalinist absurdity” of asking prosecutors to ban a Bulgarian party with a new cause and a new idea.

Barekov said that it was absurd to use a machine “of failed non-entities and former journalists” to “settle scores with inconvenient opponents of the status quo”.

The repression of BWC was proceeding on all fronts, he said.

* Ataka leader Volen Siderov, appearing on a television talk show, said that Barekov had plenty of bread to eat and cigars to smoke when he became a politician.

Notwithstanding the fact that Siderov and Barekov worked together in November 2013, with the Ataka leader promoting in Parliament Barekov’s so-called “Operation Clean Hands” proposal, in his May 20 TV appearance Siderov spewed contempt for the BWC leader.

* On May 20 and 21, Nova Televizia broadcast reports based on its hidden-camera surveillance alleging that there was vote-buying at the Bobov Dol mines, with miners being paid advances and being told who to vote for.

Miners who failed to go to the ballot booths to vote on May 25 had been threatened with dismissal, according to the Nova Televizia report.

On May 21, it emerged that prosecutors had initiated a formal investigation into the allegations in the report.

* The state is bankrupting municipalities, Oresharski (occupant of the prime minister’s chair in the BSP government) had promised 250 000 jobs but in fact there were 40 000 new unemployed, and seven billion leva new loans, while the government is deliberately keeping down the price of electricity before the elections, GERB leader Boiko Borissov told business people in Stara Zagora.

Borissov said that these were the consequences of the foolish management of the current government.

He said that foreign investors would halve, especially when they heard what was going on with the electricity distribution companies.

* Sergei Stanishev, leader of the Bulgarian Socialist Party and of the Party of European Socialists and number one on the BSP MEP candidate list, has categorically denied rumours that he would go to Brussels after the election.

“The commitment, that the BSP and I personally have undertaken, that the previous (GERB) government will not come back, has not been fulfilled, because there is the risk of racketeering and social genocide coming back, and even (GERB government finance minister Simeon) Dyankov coming back,” Stanishev said.

He said that leading the list was not to lure voters, and recalled how Boiko Borissov had led the MP candidate list of the National Movement for Stability and Progress in two electoral districts but failed to say in advance that he would not take up his seat, and said that there had been a similar case with Meglena Kouneva. (In 2009, Kouneva was the list leader for the NMSP in the European Parliament elections, but declined to take up her seat.)

* Lyutvi Mestan, leader of the Movement for Rights and Freedoms, told residents of the mining town Rudozem that the party had fulfilled the commitment it undertook a year ago to direct state policy towards taking care of the Rhodope mountains. “In this way, those from the MRF elected with your votes to the European Parliament will turn the eyes of European policy towards the Rhodope,” Mestan said.