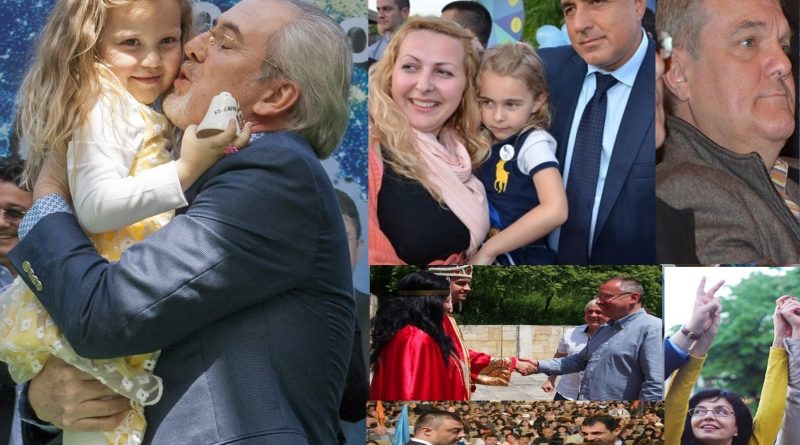 A meeting with Tsar Simeon the Great, the thoughts of a latter-day Simeon, and allegations of vote-buying – it could only have been the final Sunday before Bulgaria’s European Parliament elections.

Some jottings from The Sofia Globe’s notebook on May 18:

The investigation was initiated in connection with alleged vote-buying in Pleven, long a stronghold constituency for Petkov in his career with the Bulgarian Socialist Party, to which ABC has set itself up as a rival.

Petkov was scathing about the allegations, which he denies, saying that Purvanov had warned him about the full machinery of the state being used against the fledgling movement and asking “who the author of this scenario is”.

Petkov also complained that the media had been tipped off to be present over what was supposedly a “secret” investigation.

Earlier, the leader of Bulgaria Without Censorship, Nikolai Barekov, hurled various allegations of vote-buying against a number of other rival parties, although the former talk show host has so far offered no proof. His main allegation about vote-buying has been against ABC. This week, in a television interview, ABC leader Purvanov called Barekov “a common liar”.

In this election, I have heard about 10 lies on the topic of energy, the leader of centre-right party GERB, Boiko Borissov, said.

“I have heard the lie that Belene (nuclear power station) will be built, heard the lie that South Stream will go ahead, and to my delight heard also that it will convey Bulgarian gas. Every day there is talk about the price of electricity, that it will be reduced or not increase – an absolute lie,” Borissov said. “The fact that they do not want to give the financial statements of the National Electricity Company or the Bulgarian Energy Holding does not allow people to learnt the truth,” Borissov said.

From the South Stream project, the energy mafia represented by hundreds of Bulgarian-Russian companies in the sector are gaining, Radan Kanev, spokesperson for the centre-right Reformist Bloc said in an interview with bTV.

The intersection between foreign influence and Bulgarian policy was to be seen in the influence on the State Energy and Water Regulatory Commission, Kanev said.

On May 16, the Reformist Bloc showed what it said was correspondence between the Bulgarian Energy Holding and the Economy Ministry that proved that the changes to legislation on South Stream came from Russia.

“This is perhaps the biggest corruption affair in Bulgarian history,” Kanev said. “There is no other case in which a foreign company or foreign country provide laws to an independent country. The dangerous thing is that the political will of Bulgaria is not decided by its government,” he said.

Young people dressed up as Tsar Simeon the Great and his queen received Bulgarian Socialist Party leader Sergei Stanishev when he visited Veliki Preslav, one of Bulgaria’s former capitals.

Costumed in what was claimed to be the authentic clothing of the period, “Tsar Simeon” told Stanishev that it was a joy to meet him in a part of Bulgaria in which part of the great history of the country had been preserved, according to a statement by the BSP.

“A year ago, we promised that we will overcome the fear, that we will restore the state, that the state will once again be returned to the Bulgarians. But I see that many people say, what if the previous government comes back? So let us defeat the fear on May 25,” Stanishev said.

Simeon Saxe-Coburg, the former monarch who was Bulgaria’s prime minister from 2001 to 2005, eventually stepping down as leader of the party formed around him after its most recent electoral defeat, said on his website, “If a European federation is a functioning formula, why should we be scared?”

In his note on his website, Saxe-Coburg called on Bulgarians to vote in their numbers on May 25.

“I know that many people bristle at the mere mention of a federation. But if that is the formula that works, why should we raise national sovereignty to a cult?”

Saxe-Coburg said that voter turnout on May 25 would be test for a Europe that was seeking a greater legitimacy, “and therefore the number of votes is significant not only for the results, but also the implications”.

Saxe-Coburg’s former party, which won a decisive victory in Bulgaria’s June 2001 national parliamentary elections, currently has no seats in the National Assembly and is seen in all polls as having no chance of returning to the European Parliament.

Flu epidemic: All schools in Bulgaria closed until March 11