The government has offered amnesty for those who surrender, but has threatened to use force if the buildings are not vacated by Friday.

Ukrainian Prime Minister Arseniy Yatsenyuk met Friday with local leaders in Donetsk, and said he is optimistic the standoff can be resolved.

“I would like to state clearly that the central government is not only ready for dialogue with regions, but is ready to fulfill lawful requirements and wishes of all the citizens of our country. In the framework of the changed constitution, we will be able to satisfy specific requests of every single region,” he told them.

There were no immediate signs the government is preparing to follow through on its threats to use force to vacate the buildings. Neither was there evidence the protesters were about to surrender.

In Luhansk, one protester, who did not give her name, said if police attempt to remove the activists, things will only get worse.

“We will stay here until the end,”she said defiantly. “Our children are now working in mines, but when it starts [Ukraine government operation to clear building] they will all come here. We will stay and if they kill us – let it be.”

Meanwhile, there are lingering concerns that Moscow may be preparing to invade eastern Ukraine.

On a visit to NATO-member Bulgaria, NATO Secretary-General Anders Fogh Rasmussen said on Friday that Russia must withdraw its troops from the Ukrainian border and enter into sincere dialogue with the West.

Delivering much the same message that he has given on visits elsewhere, Rasmussen also said the NATO alliance was not discussing military action over Ukraine, but added that it was taking steps to protect its partners effectively.

NATO on Thursday released aerial photographs showing what it says are 40,000 Russian troops, along with tanks and aircraft massed near the Ukrainian border.

The imagery, released to news outlets, follows repeated Russian assurances the deployment is no cause for alarm. 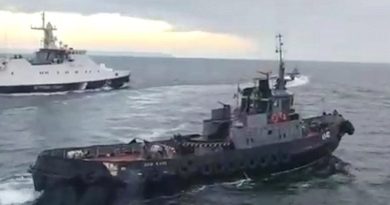