In an ostentatious display in Parliament, after a sarcasm-laden speech by leader Volen Siderov, MPs for ultra-nationalist party Ataka all renounced their immunity from prosecution in connection with the January 6 Varna Airport incident.

That incident involved an in-flight dispute between Siderov and French diplomat Stephanie Dumortier, and later a conflict at the airport between Ataka members and two men, one of them an Interior Ministry official.

The Prosecutor-General earlier tabled a request in Parliament for the lifting of Siderov’s immunity as an MP from prosecution, indicating that prosecution of other Ataka members could follow.

On January 22, the last day on which Siderov could voluntarily give up his immunity before the matter was put to the vote by the National Assembly, the Ataka leader addressed the House before handing a letter renouncing his immunity to socialist Speaker Mihail Mikov. Ataka MPs then queued to do the same.

After uproar in the House ensued from the Ataka move, Speaker Mikov said that there should be an adjournment, but Siderov insisted on speaking, saying that the day was not a public holiday.

“This will prevent all conflicts in Bulgaria and everyone will be prosperous,” Siderov told the House. Giving up his immunity would prevent World War III, Siderov said.

He said that he could see that, these days, all had been going well in Bulgaria and the government was even providing warm weather. All other problems had been solved, he said – unemployment, demographic ageing, foreign monopolies had been expelled and even the charts of happiness were topped by Bulgarians. The only problem was his immunity, Siderov said.

“Because of my immunity, which is wanted by everyone, journalists, analysts, designers, has not been given up by me nor taken away by the National Assembly, things are not proceeding in Bulgaria…I hear that the European Union is nearing collapse, there is a danger of being excluded from the EU because I retain my immunity.

“Moreover, it could become a problem, that intergalactic aliens are delaying making contact with us because Volen Siderov has immunity. To prevent accidents and disasters and World War III, I will give up my immunity. This will prevent all conflicts in Bulgaria and everyone will be prosperous,” Siderov said.

The moment did not pass without a procedural objection from Tsetska Tsacheva, a senior member of centre-right opposition party GERB and a former Speaker of the National Assembly.

She said that the behaviour of the Ataka members was a theatre performance of no legal value. No request had been filed for the waiver of immunity of the other Ataka members.

Mikov said that when handed a statement, he accepted it, and legal value was a matter of judgment.

* Meanwhile, police are investigating after a crew from Ataka television mouthpiece Alfa Ataka allegedly intruded into France’s consular building on January 21, seeking an interview with Dumortier, who has been refusing to speak to the media about the January 6 incident. 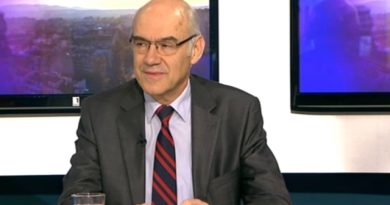