U.S. Army private Bradley Manning has been sentenced to a 35-year prison term for handing a vast collection of classified information to the anti-secrecy group WikiLeaks in the biggest breach of official secrets in American history.

A U.S. military judge, Colonel Denise Lind, imposed the lengthy term Wednesday at the Fort Meade military base in the eastern state of Maryland. She said the 25-year-old former intelligence analyst would be dishonorably discharged from the military and forfeit some of his pay.

Manning had faced as much as 90 years in prison, with government prosecutors calling for a 60-year sentence and Manning’s lawyers asking for leniency to give him a chance at rehabilitating his life.

Retired U.S. Air Force Colonel Morris Davis, former chief prosecutor at Guantanamo testified on behalf of Manning. He said Private Manning deserves to be penalized for leaking classified information while serving as an intelligence officer. But he said a lighter sentence than the maximum 90 years is warranted. “The worst thing Bradley Manning did is embarrass the country,” Davis said. “There was no real value to al-Qaida or anyone else from these classified documents when they could go on Google and get the same information.”

The sentencing ended a 12-week trial, and a lengthy legal battle over Manning’s intentions when he disclosed more than 700,000 classified documents to WikiLeaks. The documents included U.S. State Department diplomatic cables and American battlefield reports from Iraq and Afghanistan. One video showed a U.S. helicopter attack that killed two civilians.

Manning and his defense lawyers claimed that he had idealistic intentions in releasing the information, believing he could expose the truth about U.S. involvement in the wars in Iraq and Afghanistan. His lawyers also said the gay soldier’s gender identity crisis contributed to his actions at a time when the U.S. expelled military personnel who were openly homosexual.

In a courtroom apology last week, Manning told Lind, “I believed I was going to help people, not hurt people.”

But government prosecutors called Manning “the determined insider,” who within weeks of his 2009 deployment to Iraq had started working to disclose the cache of information to WikiLeaks and its founder, Julian Assange. They called his release of the information “destructive” to U.S. interests.

Lind last month convicted Manning of 20 of the 22 criminal charges he faced, but not of aiding the enemy, the most serious offense he faced, which carried a possible term of life imprisonment without parole.

Under U.S. military law, prisoners can earn up to 120 days a year off their sentences with good behavior behind bars, but must serve at least a third of their term before being eligible for parole. Manning will receive credit for the three and a half years he has already been confined.

Manning has drawn a small group of supporters who consider him a whistleblower who legitimately exposed inconvenient, war-time truths the government did not want divulged. Some of them gathered outside the Fort Meade courtroom to await news of his sentence.

The outcome of the Manning case has been watched closely as the U.S. deals with new disclosures in recent weeks by former intelligence contractor Edward Snowden about clandestine spy programs conducted out by the country’s National Security Agency. Snowden is now living in Russia in temporary asylum, with Moscow rejecting a request by U.S. President Barack Obama to expel him to stand trial in the U.S. on espionage charges. 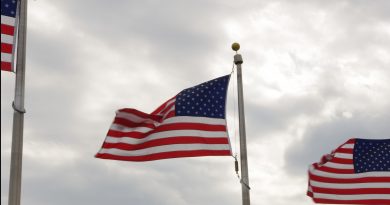 US extends security closure of some diplomatic missions