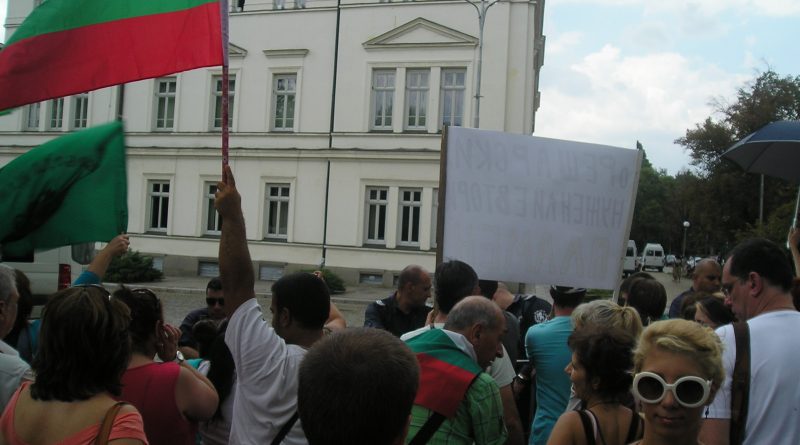 Bulgaria’s lawmakers postponed the election of a new director of the State Agency for National Security (SANS) on July 18 after Prime Minister Plamen Oresharski was late in submitting his nomination. Meanwhile, outside Parliament, traffic in central Sofia was shut down for several hours by a larger-than-usual turnout for the morning protest rally, with some protesters calling for a round-the-clock blockade of the National Assembly.

The election of the SANS director was the first item on Parliament’s agenda but the vote was delayed when it emerged that Oresharski had not made his nomination. According to the recent amendments to the SANS Act, the agency director is appointed by Parliament, but must be nominated by the prime minister.

Two and a half hours after Parliament was scheduled to vote on the issue, Oresharski submitted the nomination of current SANS interim director Vladimir Pisanchev, according to reports quoting socialist MP Dimitar Dubov, the chairperson of the parliamentary committee in charge of security services oversight.

Dubov said that the vote on Pisanchev’s appointment would be held on July 19.

Pisanchev is best-known for his role in the Galeria controversy in 2008, when SANS eavesdropped on a number of MPs in the socialist-led tripartite government coalition, as well as journalists and senior SANS officials, including the current Interior Minister Tsvetlin Yovchev, then a department head at the agency.

Meant to ascertain whether SANS employees had leaked confidential information to the media, the internal investigation code-named Galeria had become a “witch-hunt against journalists”, SANS spokesperson Zoya Dimitrova said at the time.

Pisanchev, the head of the security department of the agency, was in charge of the investigation.

Pisanchev was named interim director of SANS after the appointment of controversial MP and media magnate Delyan Peevski last month sparked large-scale protests demanding the resignation of the Oresharski government.

Parliament later rescinded the appointment, a move seen as paving the way for Peevski to return to the Parliament bench. This decision has been challenged in the Constitutional Court by the opposition party GERB, which said that Peevski’s appointment should have automatically ended his term as an MP. The court has allowed the challenge but is yet to rule on the case.

‘Occupy Parliament’
The anti-government protests sparked by Peevski’s appointment have continued daily, reaching their 35th day on July 18. For the past three weeks, this has included a small “coffee-drinking” protest outside Parliament in the morning and large rallies in the evening. 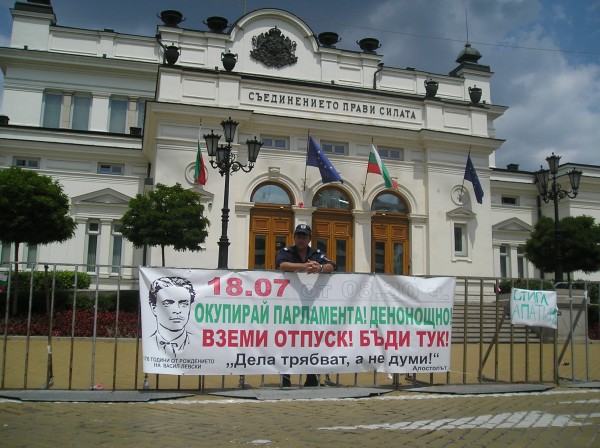 But turn-out on the morning of July 18 was the largest since the start of such rallies – partially due to the scheduled vote in Parliament, but more so because July 18 is when Bulgaria commemorates the birthday of liberation hero Vassil Levski in 1837.

Often referred to as “the apostle of freedom” in Bulgaria, Levski’s writings also envisioned a “pure and sacred republic” after liberation from the Ottoman Empire – the ongoing protests are also against the perceived confluence of private corporate interests and state institutions.

One of the calls in social media was that the protest on July 18 turns into an “all-day blockade of Parliament.” The police extended the security enclosure outside the National Assembly building; in return, small groups of protesters blocked traffic on Dondukov, Vassil Levski, Tsar Osvoboditel and Tsarigradsko Chaussee boulevards and Rakovski Street.

In the early afternoon, Tsar Osvoboditel Boulevard – part of the route taken by the evening protests, from the Cabinet building to Parliament – remained closed for traffic. The nearby intersections at Sofia University and Orlov Most (Eagles’ Bridge) were also closed down to traffic. 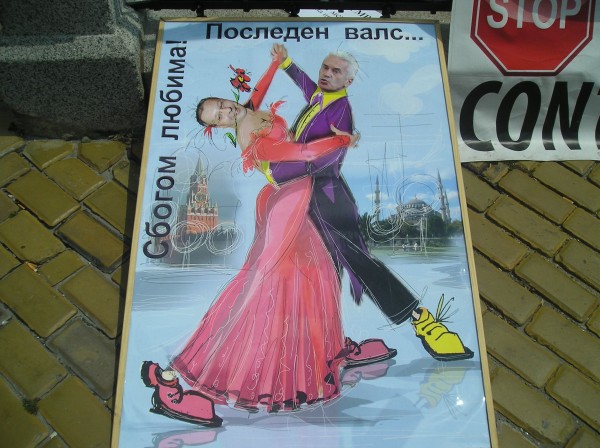 Police briefly detained and fined at least three people for breach of public peace after they refused to leave and clear the way for traffic, according to reports. Separately, four people were detained as suspected agents provocateurs after being pointed out to police by protesters.

Reports also said that a man attempted to set himself on fire at the intersection of Tsar Osvoboditel and Vassil Levski boulevards, near Sofa University, but was prevented by a nearby police officer.

Meanwhile, a smaller group of several dozen people gathered outside of Sofia City Hall on Moskovska Street, demanding that Sofia mayor Yordanka Fandukova issued a ban against the “unsanctioned rallies”.

Their demand was supported by socialist members of the municipal council, who said that the protest rallies disrupted public peace.

Fandukova’s reply was that she would not ban peaceful rallies, just as she had no intention of banning the rally outside City Hall.