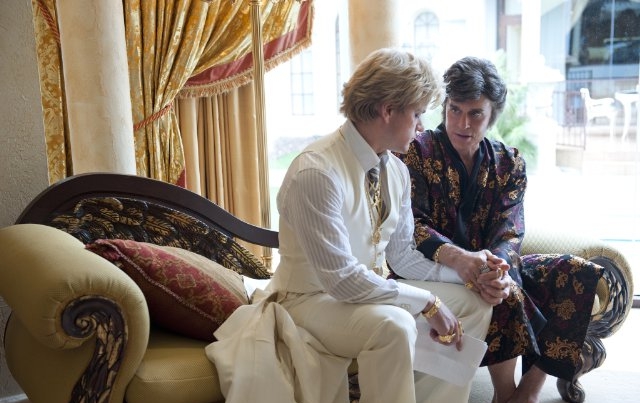 Was there ever anybody quite as stereotypically gay as Liberace? The man with the tiny poodles, the sometimes purple wig, the large portrait of his mother (played by the wonderful Debbie Reynolds), the diamond-encrusted silver suits, the fur coat that had a train many meters long, and hands that all but disappeared under the enormous golden rings on his fingers is the focus of an HBO production by Steven Soderbergh titled Behind the Candelabra.

Originally shot for television but then shown at the Cannes and Karlovy Vary festivals and now released in theaters across the Czech Republic, the film looks at the decade during which the young Scott Thorson (Matt Damon) becomes involved with the renowned, much older pianist (Michael Douglas), first socially, then sexually, then romantically, then tragically.

Scott, on whose memoirs the film is based, allegedly had to undergo plastic surgery to make him look more like a younger Liberace (or “Lee”, as he is called) and was ultimately discarded by his celebrity partner in favor of someone even younger.

Behind the Candelabra is a riot, but Soderbergh’s treatment of Liberace as someone whose taste was so extravagant, his costumes so over-the-top and his public statements that he was straight so comical, is brilliantly executed, as we end up laughing at a character who is incredibly camp without ever running the risk of confusing the character with homosexuality itself.

(Still of Michael Douglas and Matt Damon in Behind the Candelabra via imdb.com)