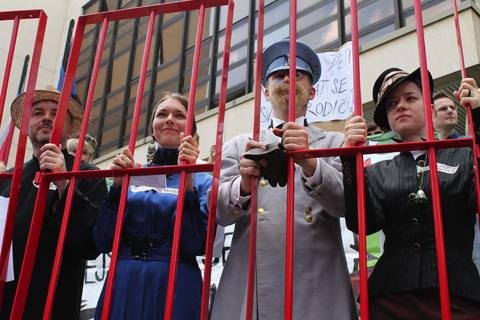 Draft legislation aimed at revamping immigration law has infuriated NGOs working in the sector and prompted more than 100 people to protest outside of the Interior Ministry. Opponents say the new legislation will set immigration law back 10 years and further complicate an already-problematic system. The draft legislation is said to affect migrants from all walks of life, ranging from those looking for short-term work to families that already hold residency permits.

Under existing legislation, Czech citizens hold the same rights as other European Union nationals. Now, they may be subject to entirely new regulations affecting family life as well as personal finances. Under the draft law, if a Czech person wants to marry a third-country national, that person must complete an integration course where a common communicative language must be apparent. This will present problems if the language used is uncommon, critics say. Both spouses must also provide financial means for the family, which NGOs believe is too strict.

For the full story, please see The Prague Post

(Photo: NGOs began circulating an online petition against the draft law and organized a protest outside the Interior Ministry on July 2, where demonstrators came dressed as famous immigrants.)