Officials in Cyprus say customers at the country’s largest bank may lose up to 60 percent of whatever savings they have above $128,000 .

Just 37.5 percent of that savings will be converted into bank shares, while the rest may be frozen, take another form of equity or, ultimately, never be paid back.

Although Bank of Cyprus depositors should eventually be able to convert their shares back to money, at this point, the shares hold little value, and it is not certain when if ever they will regain the value of the customers’ losses.

The terms are part of a European bailout package to save Cyprus from bankruptcy.

This is the first time in Europe’s handling of its three-year debt crisis that a nation’s bank customers have been forced to bear some of the cost of a rescue package.

Banks in Cyprus reopened Thursday for the first time after an almost two-week shutdown, while the government negotiated the $13-billion bailout from European neighbors, the European Central Bank and the International Monetary Fund. 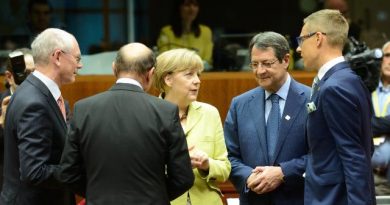 EU leaders fail to agree on top jobs, to meet again on August 30