Depositors with more than $130,000 in Cypriot banks could see about 40 percent of their deposits turned into bank shares, the country’s finance minister has warned. The news comes after Cyprus struck a deal with the European Union and the International Monetary Fund in which the small Island nation will get $13 billion in aid. To earn that money, though, Cyprus has to overhaul its banking sector and analysts say the result could be crippling.

Banks in Cyprus closed their doors on March 15, and they have not yet re-opened. The trickling cash flow already has taken its toll on the economy.

Small businesses say they are doing very little trade, and some say they already have had to lay off employees.

The worst likely is still to come, though, because the deal struck with international lenders aims to shrink the Cypriot banking sector, which is about eight times the size of the economy.

The country’s biggest lender, the Bank of Cyprus, will be radically restructured and Laiki Bank, the second largest, is set to close. The bank employs 8,000 people – a massive blow for a small country with a population of less than 1 million.

James Ker-Lindsay, Cyprus expert at the London School of Economics, said the whole economy will be affected.”This deal has the potential to be completely devastating for Cyprus. The banks are a major part of the Cyprus economy,” said Ker-Lindsay. “There is going to be a lot of businesses which will have lost money in all of this. This will trickle down through the economy. It will be absolutely enormous, the effects of this.”This EU/IMF deal differs from other euro zone bailouts because, instead of taxpayers footing the bill, depositors with large balances are bearing the costs. Cyprus academic Vassilis Monastiriotis said it is a major shift in euro zone policy.

“We had the most similar case of Ireland. We had the decision to push the bill to the taxpayer so the government, the Irish government took the responsibility of recapitalizing the banks, the deposits were guaranteed, and then this spilled over to the real economy,” said Monastiriotis. “The case of Cyprus is exactly the opposite. It is the bond holders, the shareholders, and the depositors that take up the bill, and then we try to minimize the implications to the government.”

On Monday the head of the Eurogroup, Jeroen Dijsselbloem, suggested the rescue program for Cyprus could be a new template for resolving the banking crisis in Europe. He said, “If the bank can’t do it, then we’ll talk to the shareholders and the bondholders, we’ll ask them to contribute to recapitalizing the bank, and if necessary, the uninsured deposit holders.”

Following his comments, financial markets dropped. Monastiriosis said it would be a dangerous precedent to set.”There is a big risk of destabilizing the banking system of the euro zone with this kind of solution because the savings above 100,000 euros are not guaranteed anywhere in the euro zone. This may lead to very significant outflows of capital from the euro zone – definitely from the south of the euro zone to the north. But also potentially outside of the euro zone, and this will create more problems then it solves,” said Monastiriosis.For now, though, it is the Cypriots who have to cope with the immediate impact of their banking situation.
Source: VOANews.com
(Photo: Gilles Letar) 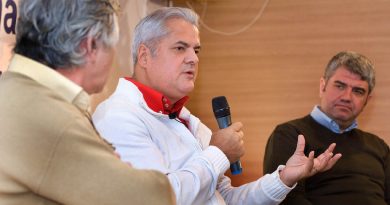