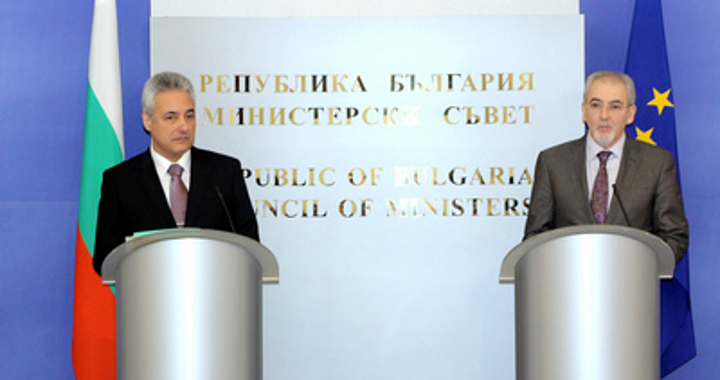 Bulgaria’s caretaker Prime Minister Marin Raykov re-iterated his Cabinet’s commitment to ensure free elections after meeting with the leader of the Movement for Rights and Freedoms (MRF), Lyutvi Mestan, on March 18.

Raykov extended an invitation to Mestan as part of his meetings with senior officials and politicians, which the caretaker PM has held since taking office last week. The invitation also came after Mestan said he was worried that some officials in the civil service might attempt to influence the results of the elections.

One such official is Mihail Konstantinov, professor of mathematics at the University of Architecture, Civil Engineering and Geodesy in Sofia. Konstantinov served for 20 years on Bulgaria’s Central Electoral Commission; he left in 2011 after being appointed chairperson of the board at Informatsionno Obslujvane, the state-owned IT firm that, among other activities, provides the software for tallying the votes in all Bulgarian elections.

Konstantinov recently said that he would do everything possible to prevent a return of the tripartite coalition – the coalition that governed Bulgaria between 2005 and 2009, in which MRF was a minority partner. Two parties in that coalition – the socialists and MRF – have now asked for Konstantinov’s sacking.

After Mestan’s meeting with Raykov, Konstantinov said that he believed the tripartite coalition to have been “very damaging” and repeated his commitment to stopping it from coming to government again, but said that he meant to use only political tools, as quoted by news website Mediapool.bg.

“Only a man who plans to lie in the elections can accuse another of planning to do the same. There will be no machinations at Informatsionno Obslujvane,” Konstantinov told Mediapool.bg.

Nevertheless, after once again being confronted with Konstantinov’s statement (after the same issue was brought up in Raykov’s meeting with socialist leader Sergei Stanishev last week), the caretaker PM said that he would meet Konstantinov and make a public statement on the issue at a later date.

“I will do everything possible so that a technical problem does not throw any shadow of doubt over the trust that we all have in the fairness of the elections,” Raykov said.

Mestan said that many civil servants acted to spread “party propaganda” on behalf of then-ruling party GERB at the local elections in 2011, asking Raykov to “make everything possible in order for state employees to remain employees of the state”.

In reply, Raykov said that civil servants were entitled to having political views, but said that civil servants in public spotlight should avoid making any statements that could be interpreted as a demonstration of support for any political party. “This is an issue of democratic culture and I hope that they will understand my appeal,” Raykov said.

Both Raykov and Mestan said that they opposed any attempt to raise ethnic tension in the run-up to the elections – MRF has always maintained that it is not an ethnic party, but it does rely strongly on the ethnic Turk vote.

(During the 2009 parliamentary elections campaign, one term became briefly notorious – Doganisation, after then-MRF leader Ahmed Dogan, which came to symbolise what nationalists see as undue influence of Turks in Bulgaria’s politics, and moreover, alleged underhand dealings in the intersection where business and politics meet.)