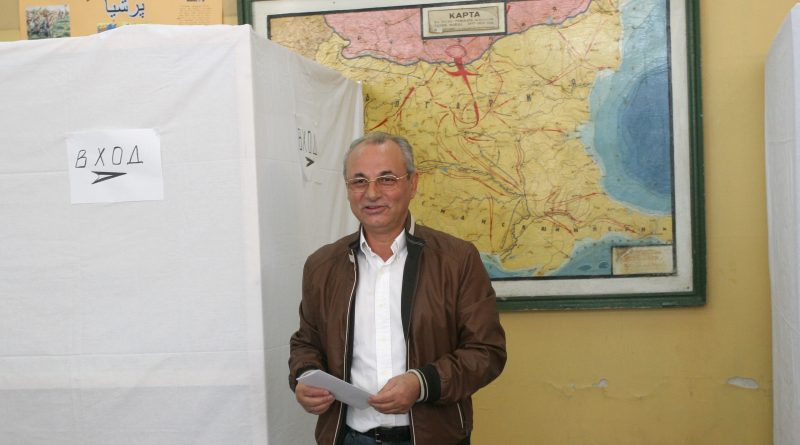 Close to a week since the incident at the party congress in which Ahmed Dogan was seen to be attacked with a gas pistol, perhaps the winner – amid all the other political and media verbiage that has flowed – in the sheer loopiness stakes is the story that the attack was motivated because of a love triangle.

That headline, in a Bulgarian-language newspaper spotted in a Sofia shop, was sufficient reason not to read the story, although that unnamed title must go down as the first to attempt to inject sex into the narrative.

It was, at least, going one better than the title that exclaimed, breathlessly, that at the rate that the Dogan incident was getting views on YouTube – three million in the first five days after the January 19 2013 episode – the veteran Movement for Rights and Freedoms leader was set to rival, or even perhaps beat, Psy’s Gangnam Style record.

Of course, there are many who do not regard the assault on Dogan as a laughing matter, even if there are also many indulging in conspiracy theories about the incident, as The Sofia Globe reported earlier this week.

Not least the MRF itself, which under the stewardship of its new leader, Lyutvi Mestan, called for an “international investigation” into the event at Sofia’s National Palace of Culture. The party also made it clear that it had no faith in the official investigation into how the incident came about.

The words of Oktai Enimehmedov, the 25-year-old in custody facing charges of attempted murder and aggravated hooliganism, may be something of a clue – or not, for those who believe that Enimehmedov is following a script (or those who wrote the story about it all being about an act of jealousy by Enimehmedov, provided that newspaper’s staff actually believed what they wrote).

According to what a Bulgarian newspaper began to publish on January 24, in what it said came from records of the initial interrogation of Enimehmedov, the assailant said that he had had the “coolest feeling in the world” as he advanced on Dogan at the MRF congress.

“It was a wonderful experience. The best moment in my life,” Enimehmedov is purported to have said.

The report said he had told investigators that he had not intended to kill Dogan (soon after the incident, this was announced publicly by senior officials, quoting Enimehmedov). The assailant said that he had only wanted to “startle” Dogan, whom he said he had liked but also saw as a hypocrite, manipulating people.

“In the past I committed crimes and accepted responsibility for them, but for years I have been making efforts to contribute something to this country. I think I am useful to the society. I can be a threat to the secret society of the Movement for Rights and Freedoms,” said Enimehmedov, who is expected to undergo a psychiatric assessment before the trial proceeds.

Enimehmedov said that he hoped for a fair trial.

One of the more immediate consequences of the Dogan incident was the firing of two senior officials of the National Security Service for having made inadequate security arrangements at the congress, while another six were to face lesser disciplinary action.

As to the longer-term consequences, the question was whether the unusually large helping of media coverage doled out to the MRF would make any difference in the national parliamentary elections that Bulgaria is to hold, probably in early July 2013.

The MRF has maintained steady levels of support in recent months and years, but its electoral fortunes have been declining slightly, and a year ago – in January 2012 – a faction under Kassim Dal walked out of Dogan’s party to form their own.

There is a big question whether the party congress incident will mobilise the base in the medium-term when elections are held (the only short-term effect, however dramatic if not appalling, was the way in which a group of men in suits, reportedly including MRF MPs, leapt on stage to put the boot into Enimehmedov).

Polling agencies had not come up with survey results by the time of writing, although Alpha Research, in a snap survey, found that 56 per cent of those polled believed that the attack by Enimehmedov was somehow linked to internal MRF party machinations.

Rival parties were more direct, with the minority Order Law and Justice party saying that the episode had been “orchestrated”, Ivan Kostov’s Democrats for a Strong Bulgaria alleging that the MRF would “ride on this political provocation to do its election campaigning” and Bulgarian Socialist Party MP Anton Koutev said that there obviously had been “a lot of deep thought, but who is designing it (the incident) and who is writing the script, I can’t tell”.

No one attached to the investigation said anything to suggest that the possibility of the incident being a put-up job was being looked at, while Prime Minister Boiko Borissov specifically ruled out this scenario.

Meanwhile, it was clear that Dogan, elevated to honorary life president as Mestan succeeded him as leader, would continue to play a strong role in the party, while Mestan rejected claims that he was a puppet on a string for Dogan. It is a fair prediction that Dogan will be a visible figure on the campaign trail in the traditional MRF strongholds, although probably with security staying a tad closer to him.

Speaking at a meeting with foreign diplomats accredited in Sofia on January 23, President Rossen Plevneliev said that he would not allow the Dogan incident to disturb Bulgaria’s ethnic peace, while earlier Foreign Minister Nikolai Mladenov had said that the incident would not disturb ethnic peace in Bulgaria, and appealed to Bulgarian parties not to politicize the episode.

Plevneliev said on January 23 that he had given Bulgaria’s institutions 10 days to come up with the results of a full investigation into the Enimehmedov-Dogan incident, and appealed for calm to allow the investigation to proceed.

The liberal group in the European Parliament, ALDE, said that it wanted a debate in the Parliament on the Dogan incident – the MRF is an ALDE member, as it is of Liberal International, professing liberal values for all the criticisms against it from detractors who see the MRF as purely a vehicle for ethnic politicking by Bulgarians of Turkish descent.

Prime Minister Borissov’s centre-right GERB government was backed by the European group of which GERB is a member, the European Peoples Party.

The EPP condemned all attempts to politicise the incident, “If the Bulgarian opposition parties bring the debate regarding the incident to the European Parliament,” the EPP Group will firmly defend the Bulgarian Government, the EPP said. “We would like to remind the European Liberals that attacks against politicians are unfortunately not isolated cases, neither in Europe, nor worldwide. Therefore, such criminal cases should not be used for domestic political party disputes and brought to European level,” the EPP said.