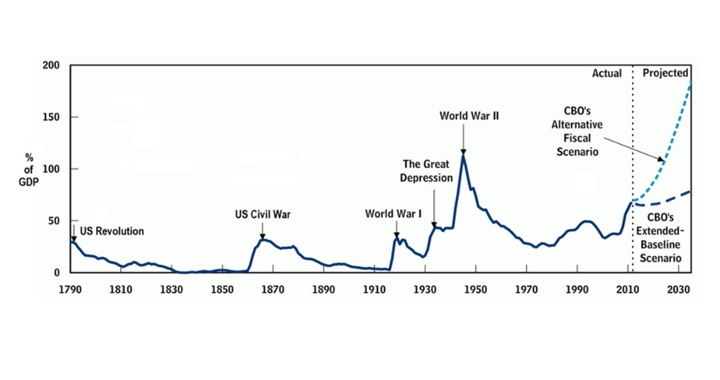 Stephen Covey, in his acclaimed book The Seven Habits of Highly Effective People, uses an interesting analogy to distinguish between management and leadership. Think of a team cutting its way through a jungle. The managers are the ones who make sure that the knives get sharpened, look after supplies to make sure the team has what it needs, etc.

The leader is the one who climbs the tallest tree, surveys the entire situation, and yells: “Wrong jungle.” In the words of Peter Drucker, management is making sure things are done right, leadership is ensuring that the right things get done.

I am not aware of any mainstream senior US politicians crying “wrong jungle” when it comes to monetary and fiscal policy. In my opinion, they should be.

The politicians have taken the US to the edge of a fiscal cliff over prolongation of tax cuts that amount to less than $100 billion a year. We’ll shortly be coming up against another cliffhanger, in that the US government needs to approve an increase in the limit to the US national debt. The political dialogue and press coverage has focused on these issues. Yet these are “wrong jungles!”

Note that the dotted light blue line (“alternative fiscal scenario”) between 2010-2030 reflects the Congressional Budget Office’s projections assuming that the status quo of fiscal irresponsibility continues. The dotted dark blue line (“extended baseline scenario”) shows that growth in public debt can be stopped in its tracks, assuming the political will exists to take some tough decisions – namely that the Bush tax cuts are stopped, Medicare reimbursement rates to doctors go down, and that tax revenues go up by five per cent as a ratio of GDP.

The above chart does not even include: (a) debt owed by foreign governments (another $4 trillion plus; (b) debts and guarantees related to Fannie Mae and Freddie Mac, which the US government argues are of a ‘temporary’ nature; (c) unfunded obligations (such as pension and social security).

Related to this issue: the US is beginning its next phase of quantitative easing, whereby it will inject $85 billion per month of stimulus into the US economy (about $1 trillion per year), financed by issuing US government bonds. Perhaps the biggest bubble on financial markets today lies with US Treasuries.

If the US does not curtail its deficit and rapid increase of debt, the following disaster scenario becomes virtually inevitable:

• Financial markets lose confidence the US dollar and US Treasury bonds

• The US dollar undergoes rapid devaluation against other major currencies (as happened in 1984 and on other occasions).

• Yields on US Treasuries could spike dramatically (double, triple, or even quadruple). I remember the Federal Funds Rate from the 1980s.

• The cost of borrowing for the US government increases dramatically. When the US government pays next to nothing (e.g. under three per cent nominal interest rate) to service indebtedness, of course it is tempting to pile up debt. But should yields climb into double digits, it will become next-to-impossible for the US to work its way out of the debt spiral, much like Greece is today, but with vastly larger effects on the world economy than Greece.

So when is this likely to happen? It is my own personal opinion that economics as a science has not yet reached the level of precision where it can forecast the timing of such a disaster scenario, present fiscal and monetary irresponsibility continuing, any more than geologists can forecast the timing of an earthquake on the San Andreas fault. But both geologists and economists know that the tectonic pressures are building, and it’s not a question of “whether”, only a question of “when”.

The US cannot afford to be in the “wrong jungle” indefinitely. Fortunately, the tectonic pressures only continue to build as deficits remain high. But it is entirely within the power of US policy makers to move us from the light blue dotted line to the dark blue dotted line. That will require leadership and courage.

(Graphic: US federal debt held by the public as a percentage of gross domestic product, from 1790 to 2012)