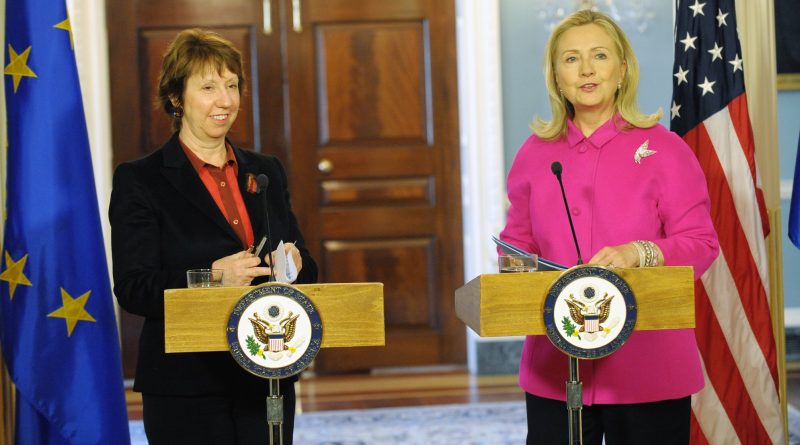 The United States and European Union are promoting closer cooperation between Serbia and Kosovo as an opportunity for both countries to advance their economic standing and European integration.

European Union foreign policy chief Catherine Ashton is leading an ongoing dialogue between Belgrade and Pristina that she says is making real progress.
“Its clear objective is to improve people’s lives and to help solve problems.  And in doing so it will bring Serbia and Kosovo closer to the European Union,” she said.
Ashton met with Serbian President Tomislav Nikolic and Prime Minister Ivica Dacic in Belgrade Tuesday alongside U.S. Secretary of State Hillary Clinton.  Ashton says it is vital that agreements on freedom of movement and customs reached through the EU dialogue are fully enacted by both sides.
“There are no other realistic or better alternatives.  And things will not get easier if difficult discussions are simply put off.  This is good for Serbia.  And it’s good for Kosovo.  It’s good for your future and for the everyday lives of the people in this region,” she said.
Belgrade has refused to recognize Kosovo since its unilateral declaration of independence from Serbia in 2008.  The United States and most European powers backed the move by ethnic Albanians and have worked to resolve the status of Serbs in northern areas of Kosovo, where U.S. officials say Belgrade operates a parallel network of hospitals, schools, and courts.
The EU dialogue does not require Serbian recognition of Kosovo, and Clinton says the Obama administration understands the political and constitutional difficulties of doing so.  But it does call on both governments to take practical measures to improve security and reassure Serbs in Kosovo.
“Kosovo is an independent nation.  The boundaries of Europe will not change.  But there is a great deal that can be accomplished by Serbia and Kosovo working together for the betterment of the people of both nations.  I understand that this is difficult, but it goes hand in hand with meeting the needs of the Serbian people,” she said.
Following their talks, Prime Minister Dacic said Ashton and Clinton made no ultimatums on Serbian judicial reforms or better relations with Kosovo.
He says no one is pushing Serbia to do something that it cannot do – like recognizing Kosovo.  The prime minister says Serbia is improving relations with Kosovo because it benefits people in both countries.
He says Belgrade is committing to resolving all Kosovo problems peacefully because the next generation of Serbs does not deserve to have these problem unresolved.
Clinton says the United States is looking to new partnerships to improve the lives of that next generation of Serbs.
“A well-educated, Internet-savvy, culturally smart population who deserve to have economic opportunities, who deserve to have a future in Europe, who deserve to have every opportunity that every other young European has,” she said.
Clinton and Ashton meet in Pristina Wednesday with Kosovo President Atifete Jahjaga and Prime Minister Hashim Thaci.
Source: VOANews.com