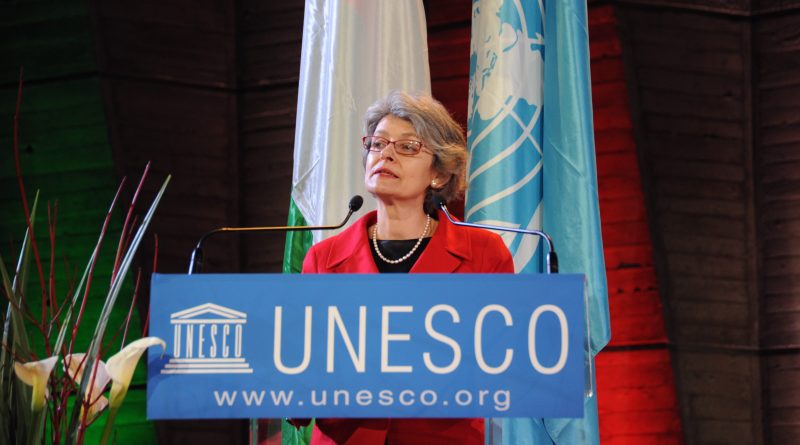 Washington’s suspension of dues to UNESCO after Palestine became a formal member last year has left the U.N. agency grappling with a funding crisis, and the United States risks losing its membership.

UNESCO Secretary-General Irina Bokova describes the 2011 funding freeze by the agency’s largest contributor as crippling, leaving it with a $152-million budget gap.
“And because the U.S. always pays at the end of the year, always, we have already spent this money in the expectation that the U.S. was going to pay,” she said. “So it was very unexpected, drastic, and that is why I dare say it was the worst-ever financial situation for the organization.”
Washington suspended payments last October, after the Paris-based U.N. agency voted to admit Palestine as its newest member. The event marked a watershed for Palestinian statehood efforts. The U.S. government is legally required to cut funds to any U.N. agency that recognizes a Palestinian state.
Bokova describes UNESCO as the victim of politics.
“I think UNESCO was caught in the middle of this political turmoil of Middle Eastern conflict, and I think this is unfair because this is not the way some of the solutions of the Middle Eastern conflict could be found,” she said.
Saudia Arabia, Qatar, Norway and many other member states have since boosted their contributions to help fill the hole, but Bokova called the funding situation unsustainable, as Washington’s dues normally account for about 20 percent of UNESCO’s budget.
The freeze has forced the agency to make drastic spending cuts to staffing and programs, including Holocaust education.
“It is important, not only because we fund Holocaust [education] per se — it is part of it, of course, but for us it is linked to genocide, it is linked to human rights,” said Bokova. “For many countries, African and others, this is important work that has to be done.”
Bokova has been lobbying U.S. politicians and other influential groups for a change in policy, explaining that it is not just about money.
“Because they will not only lose their voting rights, but they are losing their credibility,” she said. “We have a lot of expectations that this message will be well understood by the United States.”
The deadline for a change of heart is next year. Otherwise the United States will lose UNESCO membership for failing to pay its dues.
Source: VOANews.com
(Photo, of Bulgaria’s Irina Bokova, director-general of UNESCO, at the December 2011 Palestinian flag-raising ceremony: UN Photo/UNESCO/Danica Bijeljac)