Bulgarians trust Facebook more than they trust Parliament, 60 per cent believe the 2013 parliamentary election results will be rigged and even more believe that politicians work only for their own interests and ordinary people cannot influence what the government does.

That, at least, is the picture that emerges from the results of a poll done by Mira Radeva’s Institute for Social Research and Marketing, released on September 26 2012.

All government figures, including Prime Minister Boiko Borissov, had shed numbers in approval ratings since a previous poll in June, but opposition leaders – lacking charisma, according to Radeva – fared no better.

Sixty-eight per cent of those polled said that the government was working in the interests of business groups close to it.

As to support for political parties, the poll confirmed the trends shown in recent years, of current ruling party GERB with the largest share of votes, the opposition Bulgarian Socialist Party running a distant second and Meglena Kouneva’s Bulgaria for Citizens with about 6.4 per cent.

A number of minority parties currently in Parliament, including the right-wing Union of Democratic Forces, Democrats for a Strong Bulgaria and ultra-nationalists Ataka have scant chance of returning to it after the 2013 elections, going by the poll.

The politician with the highest approval rating was President Rossen Plevneliev, with 47 per cent, closely followed by Bulgaria’s European Commissioner Kristalina Georgieva at 46.9 per cent, Prime Minister Boiko Borissov 39 per cent and in fourth place, Deputy Prime Minister and Interior Minister Tsvetan Tsvetanov at 36 per cent.

National institutions in which people had the greatest trust were public broadcaster Bulgarian National Television and the Bulgarian Orthodox Church. The Presidency was in third place and the Government in seventh. Least trusted were Parliament, the State Agency for National Security and Bulgaria’s court system.

Parliament had a 19 per cent trust rating, behind Facebook, which got 26 per cent.

If the poll is correct and the elections had been held at the time it was taken, the four parties to make it into Bulgaria’s Parliament would be Borissov’s GERB, Stanishev’s socialists, Ahmed Dogan’s Movement for Rights and Freedoms and Kouneva’s Bulgaria for Citizens.

On the question of whether there should be a grand coalition government after the 2013 elections, 28 per cent were in favour while 27 per cent would prefer a grand coalition without GERB, Radeva said. Twenty-four per cent said that it would be best for GERB to win a second term, 16 per cent declined to answer and six per cent preferred other options, she said. 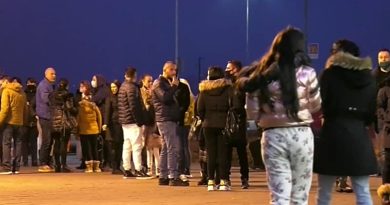 Mayor of Bulgaria’s Plovdiv: Police to assist in controlling access to big stores after reports of crowding