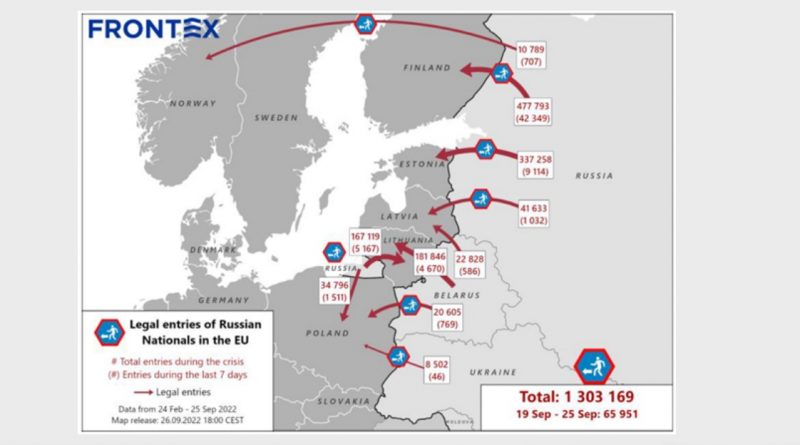 Sixty-six thousand Russian citizens have entered the European Union over the past week (September 19-25), a 30 per cent increase in comparison to the preceding week, Frontex, the European Border and Coast Guard Agency, said in a September 27 report.

Most of the Russian citizens are entering the EU through Finnish and Estonian border crossing points.

The number of border crossings has significantly increased in Finland following the announced mobilisation in the Russian Federation, Frontex said.

On September 19, Estonia, Latvia, Lithuania and Poland started to implement entry restrictions for Russian citizens travelling solely for the purpose of tourism or leisure. Similar restrictions are under way in Finland.

Since the beginning of the Russian invasion in Ukraine, already more than 1 303 000 Russian citizens have entered the EU through its land borders, the agency said.

At the same time, more than 1 273 000 Russian citizens have returned to Russia via its land borders with the EU.

Following the announcement of the “partial mobilisation” by Russia, neighbouring EU member states have seen an increase in border crossings.

Of the arriving Russians, most hold residence permits or visas to EU member states or Schengen Associated Countries, others have dual citizenships, Frontex said.

EU countries are also reporting entries by Ukrainian citizens in need of temporary protection as they flee the eastern occupied region of Ukraine via Russia.

Frontex estimates that illegal border crossings are likely to increase if the Russian Federation decides to close the border for potential conscripts.

“In the short term, we are likely to see a growing number of Russian citizens arriving at border crossing points to the EU due to the uncertainty related to the ongoing mobilisation in the Russian Federation. In the longer term, we might see an increase in illegal border crossings at the EU external borders with Russia and Ukraine, as well as an increase in illegal stays in the EU by Russian citizens already present in Member States,” the agency said.