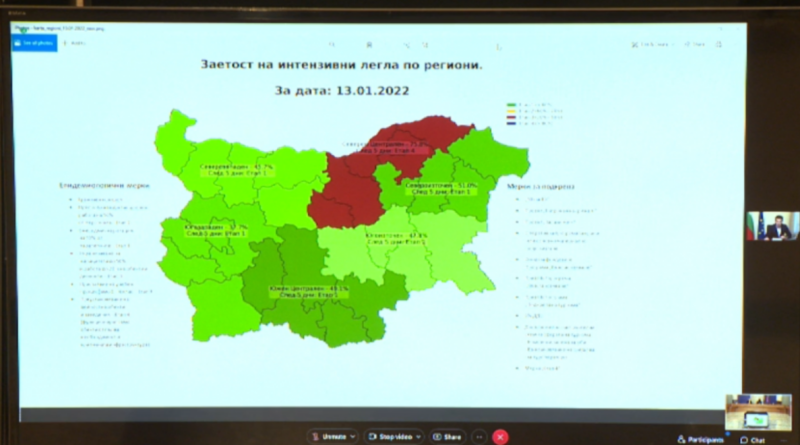 Bulgaria’s coalition government presented on January 13 its newly-adopted operational plan for dealing with Covid-19, which divides the country’s 28 districts into six clusters, and is based on four stages depending on the percentages of intensive care unit beds occupied.

Prime Minister Kiril Petkov told a news conference: “The Omicron (variant) is coming to Bulgaria with great speed. So far the models and measures were slightly unclear and not fully implemented, so we decided to change the approach, we explored all factors on which the health system depends”.

Petkov said that a map would be presented to the public each day, showing the current situation, and there would be a forecast for the coming five days.

The purpose of the five-day forecast is to enable families and businesses to make plans, rather than face unpredictability.

He said that children were being treated as a priority. Education had its greatest worth when it was in-person, and school attendance of children in the first to fourth grades was a priority, Petkov said.

The plan envisages four stages, triggering a response at each: the first when 50 per cent of intensive care beds are occupied, the second at 60 per cent, the third at 70 per cent and the fourth at 80 per cent.

Petkov said that currently, the north central region of Bulgaria was in danger of entering the fourth stage.

Petkov listed 10 measures for support for businesses and citizens, including one new one – if a small or micro-enterprise is shut down at stage four, it would be eligible for a grant from the state of 20 per cent of its average net income, up to a maximum 100 000 leva, for the days it is closed.

The other measures are essentially those inherited from former governments, initiated at various stages since the pandemic began.

These include the 60:40 payroll support plan, patronage care, “keep me on” employment measure, operational programme for food or basic material assistance, programmes involving the Bulgarian Development Bank, the retention of the reduced rate of nine per cent for companies in the tourism and restaurant business, and additional incentive schemes in the field of tourism.

Health Minister Assena Serbezova told the news conference that the operational plan takes into account the characteristics of the Omicron variant, with it being expected that there will be a large burden on the health system.

“In the past two years, we have seen not only the shortcomings of online learning, we will also see the long term consequences for the educational process,” Serbezova said.

“Gone are the days when (Education) Minister (Nikolai) Denkov learnt from the media about schools being closed. We have a very good dialogue,” she said.

At this stage, organised activities such as school excursions would be stopped.

At stage two, extra-curricular activities would be stopped, while other rules from stage one would remain in place.

At stage three, in addition to testing, half of the classes from the fifth to 12th grades would alternate with online learning, while children up to the fourth grade would remain on in-person learning.

In the case of the school education system, the risk assessment will take into account not only intensive care bed occupancy, but also the percentage of pupils absent because of illness, the proportion of absent teaching and non-teaching staff, and the morbidity rate on a weekly basis among the children.

Serbezova also spoke of a new approach in the media strategy on Covid-19 and encouraging the public to be vaccinated.

“We believe that an information campaign based on vaccination slogans is counterproductive and would repel the majority of people, in particular the hesitant. One of the concepts in our media policy is, of course, that the decision for vaccination is individual, but it has an impact on public health,” she said.

“We will continue to hold meetings with various stakeholders in the health sector. Our goal is to improve the dialogue and present the benefits of vaccination as statistics. We are developing a large-scale information campaign regarding vaccination,” Serbezova said.

She pointed out that people who relied on “natural immunity” would be informed of the long-term effects of having undergone Covid-19, in the hope of persuading them that vaccination was a better choice.

According to the European Centre for Disease Prevention and Control online vaccine tracker, as of January 13, the uptake of at least a single dose of vaccine against Covid-19 among the total population of Bulgaria is 28.9 per cent, of full vaccination 28.2 per cent and of a booster dose, 6.1 per cent.

For the EU-EEA area, the uptake of at least a single dose of vaccine against Covid-19 is 73.2 per cent, of full vaccination 69 per cent and of a booster dose, 32.1 per cent.

(Screenshot of the six clusters into which the districts of Bulgaria have been divided in terms of the new plan: BNT)