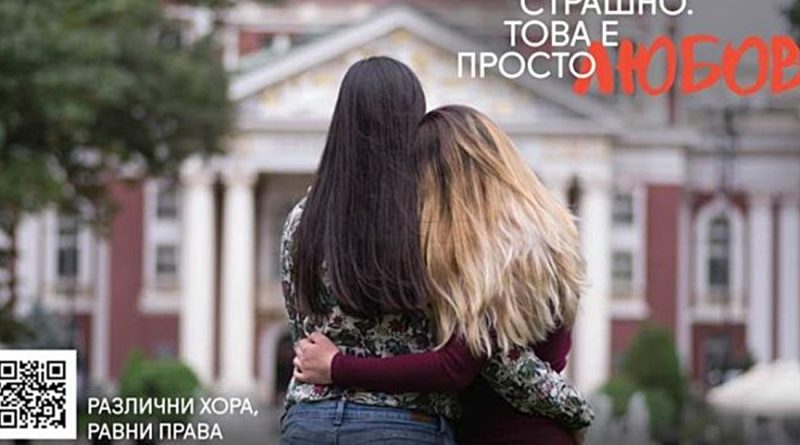 The organisers of a billboard campaign promoting tolerance towards LGBTI people have published an open letter to the mayors of four Bulgarian major cities calling on them to punish those who vandalise the billboards, and appealing to them to not to yield to public pressure to take them down.

The open letter, which supporters may back through an online petition, is addressed to the mayors of Bourgas, Varna, Plovdiv and Sofia.

The organisers said in the letter that the billboards, themed “It’s not scary – it’s just love” that in Varna, a billboard had been vandalised. Later, it was taken down by the company that had put it up.

It also noted that in Bourgas, billboards had been taken down by the company that put them, because of concerns about a campaign on social networks against them.

The letter said that this “unprecedented manifestation of homophobic aggression” had so far not resulted in condemnation from any public institution in Bulgaria.

“For us, the organisers of the campaign, the silence of the institutions is inexplicable and frightening, as the values of the European Union for respect for human rights are on trial.”

The letter called on the mayors to ensure that those who violated public order and vandalised the property of others were found and duly punished.

“We also call for you not to bow to the public pressure to remove billboards, as this would be an unlawful restriction of freedom of expression,” the letter said.

It said that it hoped to get the support of the mayors for the continuation and smooth running of the campaign, which is scheduled to continue to January 27 2019.

“The images and message used in the campaign do not in any way violate public policy provisions nor are they in violation of established advertising policies in a public environment. On the contrary, the campaign sends a human rights message.”

The letter said that the campaign aims to send a message against hostility towards LGBTI people, as well as a message promoting equality.

“LGBTI people are part of society and their rights are human rights.”

However, LGBTI people in Bulgaria are treated as unequal citizens in a number of areas of public life: in the workplace, in education, in health, even in civil society, the letter said.

Families of LGBTI people are not recognized in any form by existing legislation. There is no legislative regulation of hate crimes based on sexual orientation, gender identity and gender expression, which is why they are not investigated and punished adequately, it said.

The campaign “It’s not scary. It’s just love – different people, equal rights” is part of the project “Together for the Rights of LGBTI in Bulgaria”, which aims to raise awareness of the many forms of discrimination and prejudice that LGBTI people face in Bulgaria, the letter said.

The project is implemented by a consortium consisting of the Workshop for Civic Initiatives Foundation, the Bulgarian Donor Forum, the Bulgarian School of Politics “Dimitar Panitza”, the “Education” union at Podkrepa, the Glas Bulgaria Foundation and the Youth LGBT Action organization.

The leading organisation in the project is WCIF, and this is not the first initiative to protect the rights of the people behind which the foundation stands.

Since its creation until now, WCIF has been behind the cause of human rights and has supported the rights of people from various marginalized communities, both LGBTI people and people with disabilities, representatives of various ethnic communities, women, children’s rights and many others, the letter said.

The project “Together for the rights of LGBT in Bulgaria” is co-funded by the European Union under the Programme “Rights, Equality and Citizenship”.