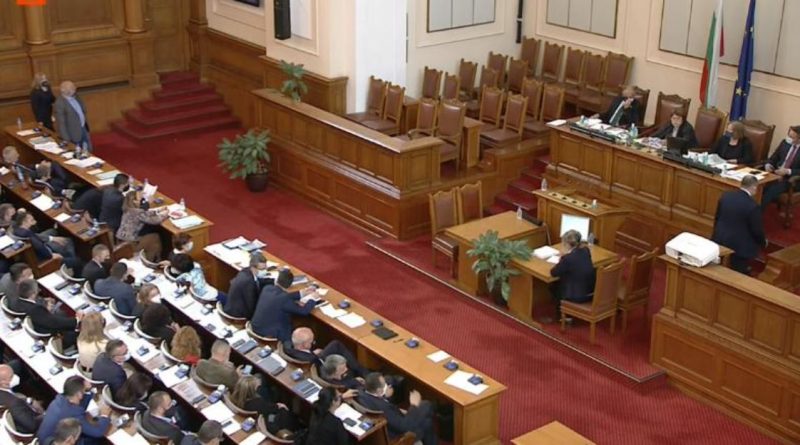 In the 240-seat House, the outcome was 210 for, none against and one abstention.

Other bills of amendments to the Electoral Code, tabled by the GERB-UDF coalition, Democratic Bulgaria coalition and the “Rise Up! Mobsters Out!” coalition were rejected.

Provisions in the approved amendments include using only voting machines, not paper ballots, at polling stations with more than 300 voters.

They also include video surveillance of vote-counting at polling stations and district electoral commissions, replacement of the current Central Election Commission (CEC) and cutting its membership to 15 people, and experimental electronic voting in the autumn 2021 presidential election.

Other provisions include electronic remote voting for Bulgarians abroad, but under certain conditions, creating a constituency for Bulgarians abroad and allowing them to exercise preferential voting and for an independent candidate, and scrapping the limit of no more than 35 polling stations in countries outside the European Union.

A second-reading vote may take place in about two weeks’ time, with the timing influenced by Parliament’s rules of procedure, the upcoming series of holidays beginning with the Orthodox Easter Friday on April 30, and the unfolding process outside Parliament that will determine whether a government will be voted into office.

It remains to be seen what changes lie in store for the amendments before the second-reading stage.

For example, it is not clear if the provision to disband the current CEC and replace it with a new one will have sufficient support at the second-reading stage. For now, it is clear that this proposal has the backing of Trifonov’s ITN party, Democratic Bulgaria and “Rise Up! Mobsters Out!” but it is not certain that GERB, the Movement for Rights and Freedoms and the Bulgarian Socialist Party will support it.

It also is not clear if, at the point the bill is debated clause-by-clause, the provision for experimental electronic voting in the presidential elections will survive.

If early elections are held, the Electoral Code must be amended so that the vote is as fair as possible, he said.

If this Parliament was to have a long life, then there would be calm talk about changing the electoral system, Yordanov said, but added that no one knows which of the two options will happen.

The day in Parliament also saw controversy after media reports that by amending the rules of procedure on April 22, MPs had voted themselves a 25 per cent salary increase.

MPs dismissed this as a lie and a misinterpretation, because the figure refers to additional sums that may be paid to those serving, for instance, as presiding officers, heads or members of committees.

In the April 22 vote, MPs rejected a proposal by Maria Cappone of “Rise Up! Mobsters Out!” that the additional remuneration be paid by bank transfer and not, as is long-standing practice in Bulgaria’s Parliament, as cash in envelopes.

On April 23, “Rise Up! Mobsters Out” group leader Maya Manolova said that the salaries of members of Parliament should be reduced to the average salary in Bulgaria, which if accepted would mean a cut from a basic salary of close to 7000 leva (about 3500 euro) to 1400 leva a month.

Manolova said that the group also wanted a serious reduction in salaries of the Prime Minister, deputy prime ministers, Cabinet members and heads of government agencies.

The Bulgarian Socialist Party said that it wanted the provision for up to 25 per cent in salary supplements to be scrapped altogether, and the salaries of members of the 45th National Assembly frozen at the level of the final month of the 44th National Assembly.

The BSP also proposes the abolition of the mechanism by which MPs’ salaries are updated every three months on the basis of the size of the average salary in the public sector in Bulgaria.