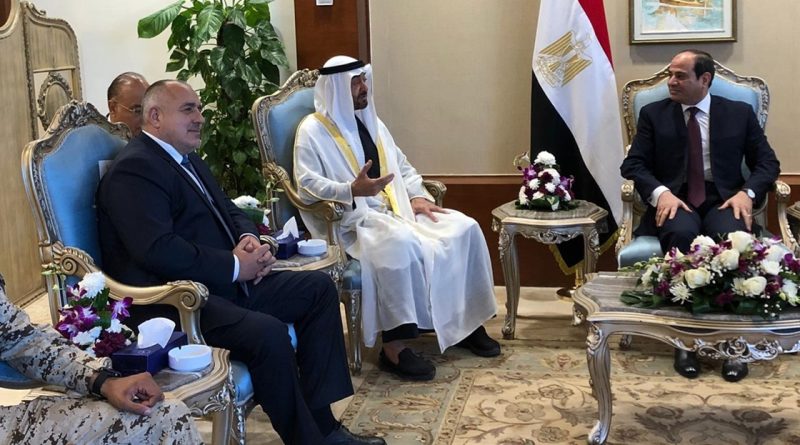 The real breakthrough in the political contacts between Bulgaria and Egypt that we have made over the last two years can give new practical expression to our co-operation in all spheres, Bulgarian Prime Minister Boiko Borissov told Egyptian President Abdel Fattah al-Sisi in talks on January 15, a Bulgarian government media statement said.

Borissov said that thanks to the constructive political dialogue from 2018, a new page of enhancing bilateral co-operation in all spheres – political, economic, energy, cultural, educational, tourism – has been opened.

The Prime Minister said that Bulgaria would continue to support Egypt in its efforts in the fight against terrorism and religious extremism.

In his words, expanding co-operation in this area also means more security for the Middle East and the Balkans. “We appreciate the very positive role played by Egypt, both as President of the African Union and its leading role in the League of Arab States,” Borissov said.

He welcomed Egypt’s serious efforts to help find peaceful solutions to crises in the region and, through dialogue, the parties to these conflicts to reach compromise, the government statement said. “A lasting peace will allow the economic and social development of societies,” he told Sisi.

Borissov said that bilateral co-operation in the field of energy is of particular interest to Bulgaria, given the gas resources of Egypt on the one hand and the implementation of a number of projects in the sector in Bulgaria.

“This will allow us to be both a consumer and a transit hub for significant quantities of natural gas from countries in Asia and the Middle East to Europe,” Borissov said.

He saidt that the first meeting of the Joint Intergovernmental Commission is expected to be held in 2020 and new high-level visits will be held. Bulgaria and Egypt already have agreed bilateral agreements, the signing of which will extend and enrich co-operation in areas of mutual interest, the statement said.